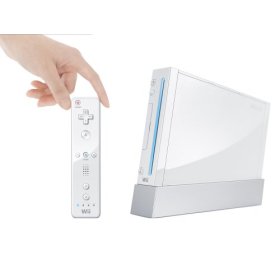 Price: £180 including one wiimote, one nunchuk, composite AV cable and Wii Sports game.

Extras:
Comments: The Wii is an attempt by Nintendo to take consoles in a different direction. The Xbox 360 and PlayStation 3 are graphical powerhouses with major multi-media capabilities; the Wii is about fun games for all the family and intuitive controls. As such, the Wii's processing power is more in line with the original Xbox than the 360. This is still pretty powerful, though. Only hardcore gamers are going to care and Nintendo's hoping that they'll pick up a Wii as their second console to complement a more 'serious' purchase from Microsoft or Sony.

Many Wii games are controlled using just the wiimote (which looks like a TV remote control). A sensor bar you sit on top of your telly can tell where the wiimote is pointing for moving cross-hairs, etc, and there are also motion-sensing components so the wiimote can be used like a golf club or tennis racket. For some games, a nunchuk attachment can be connected to the wiimote. This has more buttons, an analogue stick and its own motion sensors. Unfortunately, some of the buttons on both controllers are awkward to get to. Also, poorly designed games use shakes in different directions to replace button presses. This adds no immersion whatsoever, can be imprecise and, frankly, is just plain annoying. Motion-sensing only makes a game better when the player's movement is required to mimic 'real life' movement, such as swinging a sword or bowling a ball. Anything else is pointless. Very few games have got it right so far.

GameCube games and some downloadable games require a GameCube or classic controller to play. These are sold separately. Fine if you already have a full set of GameCube controllers but expensive if you're new to Nintendo and want to try out some of the GameCube's excellent multiplayer titles. You'll also need a GameCube memory card.

The Wii itself is very small - about the size of three DVD cases - but there is also an additional power block that tends not to get displayed in publicity photos. This, combined with the wired sensor bar, makes the Wii difficult to unthread from the matted cabling behind my telly and a faff to move round the house. The sensor bar means that a video-sender isn't much use either.

Photos can be read from an SD memory card and there's some software for playing around with the images. The results can't be saved back to the card, however, so it's a bit of a waste of time.

The Wii can connect to the internet over a wireless network and there's an internet browser available for download. This works surprisingly well even on a normal telly and I wish I'd had it to entertain me during all the sleepless nights I had when the kids were small.

As ever, a console is only as good as its games and this is where the Wii really falls down at the moment. There are hardly any that make worthwhile use of the innovative controller. Many Wii games feel like they'd actually be easier to control with a GameCube pad. Like the EyeToy camera for the PlayStation 2, developers seem to think the Wii is great but none of them appear to know what to do with it. The best games available include:

So that's two sets of minigames that are too insubstantial to justify a stand-alone release, another set of minigames, two GameCube ports and a N64 game. For a console that's been out ten months, that's not hugely promising. I guess there's also Mario Party 8 (another game which looks suspiciously like it began development on the GameCube), Trauma Centre: Second Opinion (a port of a frustratingly hard DS game) and the mildly entertaining Excite Truck.

On the way, there's Metroid Prime: Corruption, Super Mario Galaxy and, erm, Mario and Sonic at the Olympic Games. I'd be willing to bet good money there's also a huge stack of minigame collections incoming, closely followed by a skipful of shoddy tie-ins to CGI movies. Can't wait.

Honestly, if it weren't for my kids' large collection of GameCube games, then our Wii would barely have been used for months. The only places to find more GameCube games these days, however, are GameStation's second-hand racks or on eBay. Even then, the decent ones are still pretty expensive.

Conclusion: Lights will flicker up and down the country this Christmas as a million Wiis are switched on. Whole families will wave their arms about like lunatics for a few days. Everyone will have a great time. By Easter, though, the thing will be covered in dust and the kids will start demanding a PlayStation 3.