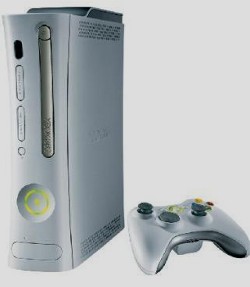 There are plenty of bundles and deals around and you should really expect a couple of games thrown in as well at these prices.

Don't bother with the arcade console pack. A few games don't work without a hard-drive and a hard-drive will also improve load times in some games. The premium pack is a better deal than buying an arcade pack plus a hard-drive separately.

Don't buy second-hand. The design has changed slightly so that new consoles are more reliable. The disk drives are also (allegedly) faster and quieter. Microsoft have retrospectively extended the warranty of all 360s from one year to three years for problems involving the 'three red lights of death'. They'll fix or replace consoles with this problem for free but it's a hassle and takes a few weeks. For the amount of money you'll save, you're as well buying new.

If you're wanting a console that plays HD movies, can store lots of downloads, you can play online and that connects wirelessly to the internet then you're looking at well over £400 for the full Xbox experience. Suddenly the PS3 looks like a bargain (and that lets you browse the internet, not just download things).

Comments: As I've said before, if you're thinking of getting into gaming then your best bet is buying a PS2 or second-hand Xbox and a pile of second-hand games. You'll be able to try out plenty of different genres of games cheaply. (Sadly, desirable second-hand GameCube games are hard to find these days). The latest generation of consoles is still expensive and the selection of games is limited (particularly for the PlayStation 3 and Wii). With Christmas approaching, however, if you have an aging console already, you may be thinking of upgrading. The supply of decent, new games for the last generation of consoles has dried up. For better or worse, developers have moved on to the PS3, Xbox 360 and Wii.

First things first, the new generation of consoles are much more complicated than previous generations. There are screens and screens of menu options and it will probably take a couple of hours to get the 360 set up to take the best advantage of your AV system and to get familiar with it.

When you first get a game going, you may be a little disappointed.

The graphics aren't going to blow you away. They're impressive but, let's face it, your mum won't be able to tell the difference between the 360 and your last console. The increase in power is less obvious than between previous console generations - it's most notable in things like level of detail, draw distance and number of objects on screen at once. On a normal telly, even you may struggle to tell the difference between the best Xbox games and a mediocre 360 title. Hook a 360 up to an HD display and shove in BioShock, however, and you'll be amazed.

There are plenty of game demos available. You can even download them while playing other games. Most weigh-in at more than half a gigabyte, though, so you'll need to check your broadband connection doesn't have a usage cap. There are also music videos, game extras and small games to download for a fee. A limited selection of films can be downloaded but they're relatively expensive, you can only rent them and HD versions are around 5GB in size! You can put your own music collection on the hard-drive and use it as the soundtrack to games.

The machine itself looks nice (if you care) but whirrs incredibly loudly when in use, making more noise than my washing machine on rinse. It also gets very hot - hide it in a drawer to blank out the noise and you'll need oven mitts to pick it up afterwards. Seriously, give it plenty of room to breathe.

Hmmm... This isn't coming across as too encouraging. On the one hand, the 360 is expensive and has a number of flaws. On the other, of all the consoles I've owned, my 360 is the only one I've become emotionally attached to. It's provided me with a great deal of entertainment and relaxation. That's down to the range and quality of games available. Highlights include:

Many other titles are on their way soon(ish), including: Fable 2, Fallout 3 and Too Human.

Of the downloadable games, most seem over-priced attempts to wring a few pounds from nostalgic gamers. Pac-Man really isn't as much fun as you remember. There are a few worthwhile offerings, however: Worms, Bomberman, Castlevania: Symphony of the Night, Geometry Wars, Puzzle Quest and adaptations of strategy boardgames Carcassonne and Settlers of Catan.

The 360 will also play many games written for the original Xbox. Each game requires a patch to be downloaded to make it work, however. (It's possible to send off for a DVD with all the current patches on it). Which games are compatible and how well they work is somewhat pot-luck. Check online before making any purchases.

Conclusion: Any console is all about the games.

At the moment, the 360 has the games I want to play - western role-players and third-person adventures - and there's almost nothing on PS3 I'm interested in that I can't get on 360. The Wii has some fun, novelty titles, a couple of good games and a pile of substandard ports and party games.

It's telling that when my 360 turned itself into a giant doorstop and Microsoft reckoned it would take a month to fix, I felt bereft. The Wii couldn't tide me over and I couldn't see the point of buying a PS3. I just wanted my 360 back.