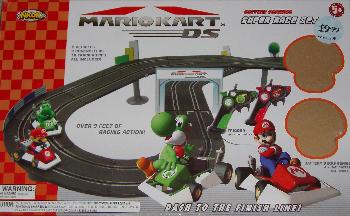 You bought more pokemon tack? No, no, it's Mario tack.

That's not so bad, I suppose. But does it actually work? Just about.

Er... It's a slot-racer. You put a car on the track, you squeeze the accelerator trigger and the car goes round. How can it 'just about' work? The sections of track clip together nicely on a flat surface but the joints feel the strain a bit once you've got the bridge up and are working in three dimensions. There's plenty of fine adjustment of supports to be done. The wire brushes on the underside of the cars which allow them to take power from the metal strips on the track need frequent tinkering because they can be easily knocked out of line by spins and crashes.

Sounds like a faff. Can be. You'll be cursing it under your breath on occasion. Then it will suddenly work properly and you'll be away. The cars really whizz round and keeping them from flying off is quite a challenge. The way the cars spin out of control is very reminiscent of the computer games.

Speaking of which, do you get to drop banana skins and throw shells at your opponent? Sadly, banana skins and shells are not included. Not that staying on the track isn't hard enough as it is. Trying to race two cars by yourself when the kids have long since got bored is a particular challenge.

Are you sure you bought this for the children? They're actually quite taken with it. It's supposedly not for under-fives but Sproglette plays with it as a toy and doesn't mind the car coming off every couple of seconds as long as I'm there to put it back on. Sprog1 enjoys the racing. Sprog2 (who's five) finds it frustrating, though - he can't keep the car on the track long enough to really get into it. 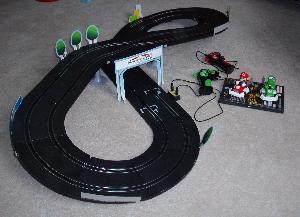 Ooh! A whole nine feet of track! (DVD box for scale).
What happens if one of them sits on it by accident? It's doomed but, considering how much Sprog1 recently spent on Pokemon danglers from a toy dispenser in a desperate effort to get a pikachu, the cars are probably worth nearly a tenner as ornaments. They seem pretty sturdy. (I wouldn't want them flying off a table onto a hard floor, however).

Stocking-filler? Yeah, but it takes fifteen minutes to set up and adjust so you'll be wanting to put it together the night before as part of the last-minute Christmas Eve panic. Avoid trashing it in a mulled-wine-fuelled grand prix with your partner. The crash barriers, banner and scenery are made of thinner card than the packaging. Oh, and it requires 4 AA batteries which aren't included and you'll be needing a screwdriver to insert them. (I really hate that).

Yeah, the kids are much more likely to eat the batteries in excitement while I'm hunting around for a screwdriver during set up than they are to take them out of the controllers and snack on them in the middle of a game. Exactly.

I bet the packaging is full of annoying wire ties as well. Anything else? Some sets seem to have Donkey Kong rather than Yoshi but the box has pictures of both DK and Yoshi. That's the kind of thing small children can get really worked up about. 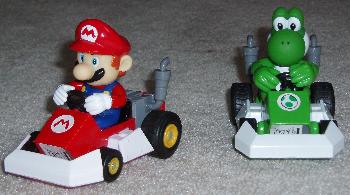 Pithy conclusion? Worth a shot if you have little Mario fans and you can find it cheap. (Check out GameStation). Otherwise you'd be better saving up for something more convincing.