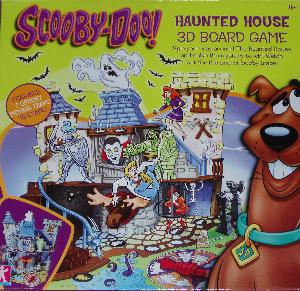 Contents:
Gameplay: Players take it in turns to spin the spinner built into the board and then move the number of spaces shown. Some positions of the spinner indicate that the ghost on top of the haunted house must be pushed down after the player has moved. This activates a random selection of the traps around the house. Stairs shake, flooring wobbles, furniture moves and a cage goes up or down. If playing pieces fall off or get knocked over they have to go back a few spaces. Players whose pieces are trapped miss their turns until another activation of the mechanism frees them.

Object: To reach the top of the house and unmask the villain. 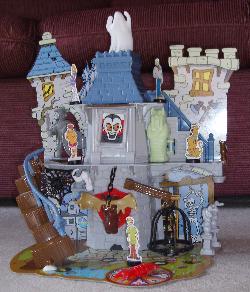 Game length: 15 minutes. Setting up the game for the first time takes at least half an hour, however. The game also requires a certain amount of dismantling to get back in the box again when it's finished with. This means there's about five minutes of set up for the first shot after the game comes out of storage. Thankfully, additional shots don't require any more work.

Age: Officially 4+ but this is really just a glorified game of Snakes and Ladders with plenty of snakes and no ladders. If a child can spin a spinner, then they can take part. Activating the mechanism without manually knocking off playing pieces or bits of trap is tricky, though. Young children will need someone to do it for them and one player probably needs to be at least seven so they're capable of fixing up the house when required.

Comments: Initially this was a little disappointing. The game involves as much construction as a Lego set when it first comes out of the box, the rules are unclear and jogging the table results in a cascade of little plastic pieces. Sprog1 got the game last Christmas and we played it a few times but then it went back in the box and we've only just got round to playing it again.

The game seems a lot better now the boys are a little older and able to play it without making it fall apart. By adding the rule that a player can keep going to the next space if they land on the same space as another player, the game is less frustrating. (It's still possible for everyone to get stuck for a while trying to climb the first set of stairs, though). There's not much to the gameplay but the game looks cool, involves Scooby-Doo and everyone gets regular opportunities to set off the traps.

As this kind of game goes, Scooby-Doo! Haunted House isn't awful but only fans of the show are likely to really appreciate it. It's too fiddly and dependent on luck to be worth anyone else's time. 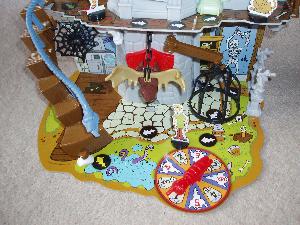 Conclusion: Better than playing Mousetrap but not as good as watching
the live-action movie.

I love this games and got from Warner Brothers...