Contents:
How it works: You fill the pens with water and they can be used to draw on the mat. The mat is made of two layers, white on top, blue underneath. Wherever the top layer gets wet, the blue shows through. Drawings fade as the water dries, and the mat can be used again. The mat folds up small when not in use.

Age: Officially from 18 months but even children younger than that should be able to get something from it under supervision. Once kids are approaching school age, they'll be wanting real pens and paper, though. 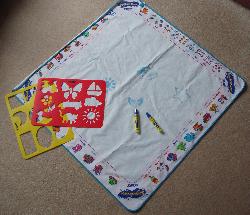 Comments: Our local nursery has paints set out for the children to use whenever they like. The kids go over, paint a picture and someone other than me gets to clear up the mess. This would have been excellent if Sprog1 had ever taken advantage of the set up. Instead, he spent all morning doing jigsaws and then came home and wanted to paint. Grrr... If I ever I gave in, he invariably ended up slopping seven colours of paint on the same spot and creating a black spludge. Then he was finished in two minutes and I was left with a quarter of an hour of slimy tidying. Double Grrr...

Aquadraw was the answer. Sprog1 could scribble away to his heart's content, even in the lounge while I relaxed on the sofa, and there was no tidying and no artwork to leave lying around drying. Result.

If your kids have more artistic talent than mine, they might become frustrated, though. The quality of pictures shown on the box is realistically unattainable. The water 'bleeds' if the pens are pressed down too hard and they're quite thick anyway, so precision is tricky. Over time, the mat gets water stains as well, especially if large amounts of water are used, such as if a pen leaks or a bowl for handprints is knocked over. 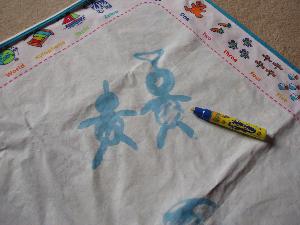 This is more the level of actual drawings...
Handprints don't work that great, by the way. It's worth just sticking to the pens. I also found that the kids had moved on before they were capable of using the stencils themselves. (Gave me something to mess about with, though).

There are colourful pictures round the edge of the mat and outlines of letters and numbers for kids to practice their writing. These seem more to make the thing look attractive and educational than anything else, however. It would really be more useful having a larger drawing area.

There's now a small Aquadraw industry with colouring-in pictures and Thomas the Tank Engine themed sets and rainbow mats and goodness knows what else. This set will probably serve your needs best, but it's worth looking around.

Conclusion: Not perfect but a great way to encourage small children to draw without fear of them turning themselves and the house purple.