Price:
Contents: It's a ball! Except you can squash it flat and throw it like a Frisbee. After a few seconds, the internal sucker cup comes unstuck and the thing pops up to become a ball again.

Gameplay: Roll it, throw it, kick it, sit on it, play hot potato or just take bets on when it's going to pop.

Age: Officially 5+ but it depends what you're doing with it. It's quite heavy and has hard edges when flat, so little children aren't going to want to play catch with it much. (The smaller Phlat Balls might be better for this but I don't know for sure because we only have large ones). On the other hand, the deforming nature of the thing makes it unsuitable for being kicked around hard by older children. 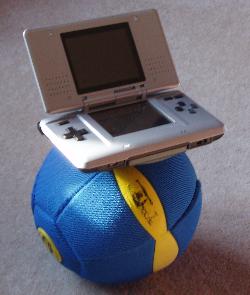 Comments: You're supposed to throw this to a friend and have it pop in midair so it changes course and is more difficult to catch. Getting the timing and distance right is tricky, though. Thanks to its hard edges and tendency to try to nip your fingers, catching it as a Frisbee isn't much fun. Trying to get it to accurately travel far enough to pop without clonking anyone isn't much fun either.

Nope, the real fun is in squashing it flat in the middle of the lounge and watching a young toddler peer at in excitement and anticipation before wetting themselves in fright as it pops loudly and leaps into the air. Ah, memories...

Once you're aware of its limitations, however, the Phlat Ball comes into its own. Working out how to have fun with it without bruises or getting sand in anyone's eye is part of the game. Favourite uses in this household include launching unsuspecting small toys skywards, imprisoning Power Rangers and scaring the wits out of smaller siblings.

Conclusion: Doesn't really work as advertised but there's still plenty of enjoyment to be had.