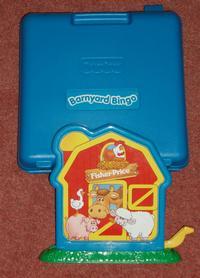 Gameplay: There are three variants to the game. In each one, players take turns to open the gate and release a disc.

Object: Who cares? This is all about posting things into the top of a machine and then pulling a lever to have them come out the bottom with a 'Sproing!' noise. 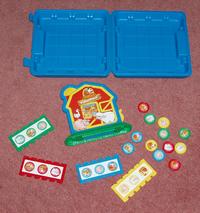 Age: 3+. Younger children could join in as long as someone makes sure they don't try and snack on the discs. Children over five aren't going to stay interested for long.

Comments: This was one of the surprise hits of Sproglette's third birthday and I might well have bought it for every toddler I knew if I'd been able to find it on sale anywhere. As so often seems to be the case with decent stuff, however, it was immediately ousted from shelves by all kinds of games that don't really work and toys packed with rubber aliens and slime. Looks like it's been re-released, though, or someone's found a stack of the things at the back of a warehouse. (At time of writing, Tesco direct have it in stock.) 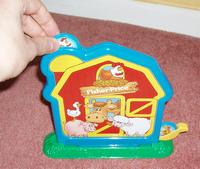 Small children like animals, posting things, pulling levers, funny noises, surprises and brightly-coloured pastic. In a stroke of genius, Barnyard Bingo has all these things. The game itself is almost superfluous. This is probably for the best, since it's hard to get kids to follow the rules anyway. They always want to match both colour AND animal at the same time. There's also no skill to winning and the whole thing can be over in a couple of minutes. Nope, the fun is in posting animals and then pulling a brightly-coloured plastic lever to make a funny noise and see what appears.

This can literally go on for hours.

Fortunately, unlike with games involving dice, you won't end up doing most of the work counting out movement or spending your whole time reminding children to take their turn. They'll happily get on with it themselves. Even better, they'll be more than willing to take your turn for you, allowing you to grunt gentle encouragement as you lie on the sofa, resting your eyes.

The rattling and sproing!ing can get tiresome after a while but it's nowhere near as loud as Hungry Hippos.

Conclusion: Very useful for entertaining a pre-schooler with minimal effort on a rainy afternoon.