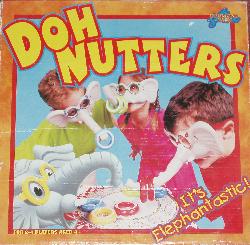 Contents:
Gameplay: Players each wear a mask, bend over the board and then simultaneously race to pick up the doughnuts of their colour using only their trunk. 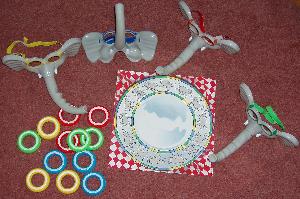 Object: The first person to get all three doughnuts on their trunk at the same time is the winner.

Game length: Potentially forever unless someone cheats. (Sober adults can win in under thirty seconds, however.)

Age: 4+ officially but no one under eight will be able to win and no one over seven will want to play (unless they're a lot over seven and drunk).

Comments: I quite frequently decide to write a brilliant and witty review recommending a fantastic toy or game, only to discover the thing isn't made anymore. Did you know the Dungeons and Dragons board game is actually pretty excellent, for instance? So is Pokémon Yahtzee Jr. Better than that, Duplo did a wonderful train set about ten years ago. Oh and, believe it or not, the Cinderella Glass Slipper Game is surprisingly not awful. Good luck finding any of them outside eBay, though - thanks to changing fads and low marketing budgets, decent products fall by the wayside all the time.

Conversely, I'm occasionally stunned to discover absolute tat still going strong. Whoever is buying the Golden Coin Maker please stop. Even some of the classics, like Monopoly and Mouse Trap, aren't much fun. Still, when I saw a TV advert for Doh Nutters the other day, I couldn't quite believe it.

It's dreadful. The production moulds should have been destroyed years ago.

For a start, the masks are uncomfortable. Children are forever taking them off and then wanting help putting them back on again. Not that there's much point - it's almost impossible for an under-five to pick up one ring, let alone a second one without the first one falling off again.

Nonetheless, young children tend to imagine the game is going to be loads of fun. On seeing the box, they will cry in frustration if they don't get to play. Unfortunately, if they do get to play, they'll cry in frustration because they can't manage it. This is something of a lose-lose situation. Children old enough to have any chance of success, meanwhile, won't be too thrilled at the prospect of looking like a comedy elephant.

After five minutes, the only one left still wearing a mask will be you as you're forced to perform tricks with plastic doughnuts for the amusement/embarrassment of your assembled offspring and their friends. They probably won't even give you peanuts.

Conclusion: Avoid if humanly possible. Its continued production is astonishing.