A Boy and his Blob (Wii) 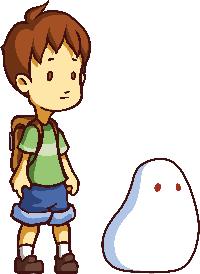 Story: A blob falls to Earth, searching for help. He finds a young boy and together they set off to defeat the evil Emperor who is terrorising Blobolonia.

This task involves a surprising number of jelly beans.

Gameplay: You control the boy as he explores the 2D platform levels. On his own he can't do much other than make tiny jumps, push small objects and come to a sticky end. Progress requires feeding the blob specific types of jelly bean to transform into useful objects. The available objects include a ladder, anvil, space hopper, giant hamster ball and (improbably) a hole.

The main levels are more about puzzling than quick reflexes. The boy is extremely fragile and guiding him past environmental hazards, dead ends and evil blobs is a case of working out which beans to use, in which order and where to throw them.

Each of the 40 levels has treasure chests hidden within it. Finding all three unlocks one of another 40 bonus challenge levels. These don't have to be completed to finish the game but getting through each one unlocks rewards such as concept art. The challenge levels tend to concentrate on exploring the uses of a single type of bean or on harder platforming.

There are no pointless motion controls. In fact, the game can be played using the Classic controller.

Difficulty: Seven-year-olds should be able to take a crack at it with some help.

Save System: Automatic save at the end of the level only. This can become a bit of an issue on later levels. That said, if you do have to quit halfway for some reason and come back later, making your way through a level is much quicker second time round.

The game only has one saved game slot.

Whose idea was that? Only one person can play through the game at a time on any given Wii unless they're prepared to share a saved game (which takes away much of the fun of finding the treasure chests).

There's absolutely no reason for this and it's just stupid. The only way around the problem is for every player to have their own SD card and move their saved game onto it after every play session. (Copying isn't enough. The data has to be moved entirely off the Wii and onto the card.) This is a fair amount of hassle, is potentially costly, and has the clear risk of a deletion disaster.

It's insane and worth thinking about carefully if more than one person in your household is going to want to play.

Comments: Sprog2 (aged 7) took one look at the box of this game and jumped up and down in excitement. He instantly loved the blob. I think he wants one of his own...

The game is initially a bit confusing, thanks to a lack of menus and tutorials. There's a short cut-scene and then you're pretty much left to your own devices. You have to work out the controls and mechanics for yourself. This adds to the haunting atmosphere but isn't entirely helpful. Fortunately, the graphics are deeply endearing, maintaining interest until the basic concepts have established themselves and the puzzles becoming absorbing in their own right. Watching the boy hug the blob is enough to make even the toughest housedad go, 'Aaaahhhhh...' 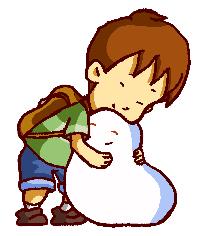 The first few levels are pretty easy, with lots of signposts showing which beans to use. These gradually peter out, though, and the treasure chests become better hidden, causing the game to require much more thought. Despite only having access to a maximum of eight types of bean in any given level, there are still often multiple ways to negotiate obstacles. It's easy to end up trying some convoluted series transformations, only to suddenly realise there's a much simpler solution. Controlling some of the blob's forms can be a trifle fiddly but the actual puzzling is a joy.

Collecting all the treasure chests quickly becomes obsessive (particularly for children) and greatly adds to the longevity of the game. There's an excellent balance of exploration, problem-solving and platforming. The numerous checkpoints, infinite lives and endless jelly beans help avoid frustration but the clever puzzles ensure the game maintains a steadily increasing challenge. Besides, although there's no great penalty for dying, the hand-drawn animation ensures a little pang of guilt every time you carelessly guide the boy to his doom (especially whenever the blob is close at hand to mope).

With heart-warming graphics and intuitive but complex gameplay, A Boy and his Blob is fun, challenging and charming.

When it comes right down to it, I want my own blob, too...

Conclusion: Essential... as long as you have enough memory cards to go round.

Graphics: Touching and beautiful. Imagine what a game based on Laura's Star would look like.

Length: Medium (if you make sure to collect everything).

Rating: 5/5 if you don't have to share it with anyone (or you simply don't tell them about it).