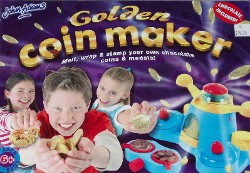 Contents:
How it works: Melt chocolate chips, mould chocolate coins, coat them in foil and then stamp them on each side with one of a selection of designs. 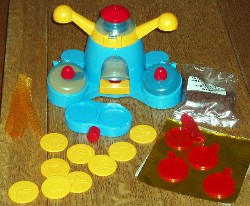 Comments: When Sprog1 turned six we decided to give him a pound a week. In return, he has to hoover the kitchen floor after tea. Sprog1 now makes much less mess eating but Sprog2 makes far more. Coincidence? I think not... Unfortunately Sprog1 has not learnt the value of money as we had hoped. He blows it all on the first shiny bit of tack he sees. If we manage to dissuade him, he just picks something else that's equally inappropriate instead. Then he takes it home and either breaks it or forgets about it. He simply likes spending money - he doesn't care on what. It saves on disappointment, I suppose, but it's somewhat infuriating.

One of his first purchases was the Golden Coin Maker. He'd seen the advert on telly and I think he got the impression that you turned the handle and chocolate coins cascaded out like magic. I can see the attraction in that. The truth, however, involves much more effort.

Trying to melt chocolate using a small plastic bottle full of warm water is less than effective. Having only four moulds means you can't even prepare plenty of blank coins in advance. Since the coins have to be left in the freezer for fifteen minutes once moulded, it takes at least half an hour to produce any coins at all. With more than thirty steps in the process to make each coin, even with practice the production rate after that is unlikely to exceed two coins every fifteen minutes. On our first (and only) attempt, I and the boys made six coins in an hour and a half, and that was with me actively involved the entire time.

In an hour and a half.

It wasn't even fun. It was frustrating and difficult. I could barely bring myself to eat my share (i.e. one) when teatime came. I wanted to frame it, hang it on the wall and show it to visitors as some kind of housedad badge of honour. Look! I survived the Golden Coin Maker!

Do not buy this. If you want the kids to do something creative but they only want edible treasure then here's a better plan:

For twenty quid you can buy an awful lot of pre-made chocolate coins and plenty of craft materials. Get the kids to make greetings cards and pay them with the coins. You will save a vast amount of money and they will get lots more coins for far less effort. You will not go mad.

I bought this for my 6 year old boy and he loved it. I helped him do it but once you have done it it is easy peasy. TIP...make sure the water is hot though as this helps to melt the chocolate bits. Yum

Yeah, once you've got the hang of it, it's not hard... but it doesn't get much less laborious or more speedy. Any kid who is mostly in it just for the chocolate is going to get fed up very quickly.