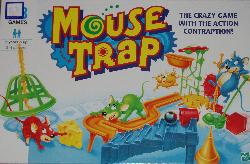 Contents:
Gameplay: Players take it in turns to roll the dice and move their mouse round the outside of the board. Some spaces give cheese pieces, others allow an extra bit to be added onto the trap. There's a small loop of spaces at the end of the trail. One of these spaces allows the handle to be turned to set off the trap. If a mouse is caught on the cheese space by the trap, then that player is out. When turning the handle, a piece of cheese can be spent in order to roll the dice in an attempt to move an opponent onto the cheese space.

Object: To be the last mouse left on the board after the trap has been built and all the other mice have been caught.

Game length: Fifteen minutes if you're lucky. Half an hour if you're not.

Age: 6+ apparently but I wouldn't entirely trust anyone under eight to put it together without breaking it. Aside from the construction, however, there's not much else to the game apart from rolling the dice and very occasionally turning the handle. My two-year-old can cope with that.

Comments: Sadly, the man from Rentokil didn't turn up with one of these. Which is a shame, because it might be fun with live mice. I could have watched them scurry around in fear of giant bowling balls and little plastic divers. Then, after the trap had failed to work for the third time, I could just have bored the little critters to death by forcing them to play a hideously ill-conceived boardgame.

I thought I had fond memories of this game from childhood but, on closer examination, I discovered most of these recollections were of the trap being difficult to put together, hard to reset and prone to going wrong. Everything else was just rose-tinted nostalgia.

Admittedly, the game has changed over the years and the board is slightly easier to put together than it once was. The addition of the cheese pieces is almost entirely pointless, however, since it's nearly impossible to run out of them. Little has been done to make the gameplay entertaining.

The first half of the game is really just a drawn out way of putting the mouse trap together. Nothing interesting happens.

The second half drags on forever. The mice circle round six squares, waiting for cosmic forces to intervene, the planets to align and the trap to actually be sprung. Since this requires one mouse on the cheese, one mouse on the 'Turn Handle' square and the absence of mechanical failure, it can take a considerable length of time.

To be fair, it's great when the trap does work. The kids enjoy setting the thing off a few times once the game is over. Even that's a certain amount of effort for not much reward, though. 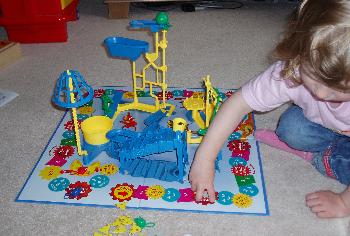