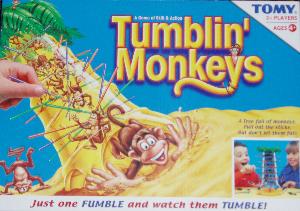 Contents:
Rules: The 'tree' has five levels. Six sticks (two of each colour) are threaded through holes around the side of each level. The monkeys are tipped in the top of the tree so that they are suspended by the criss-crossing sticks. Players take it in turns to roll the dice and remove a stick of the corresponding colour from the highest level that still has a stick of that colour. If a player makes a monkey fall out, they get to keep it. If there are no sticks left of the right colour, the player doesn't have to remove a stick that turn.

Object: To be the player with the fewest monkeys once all the sticks are removed. 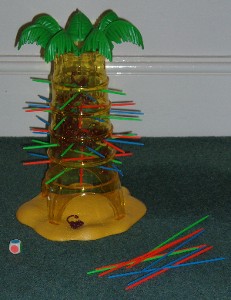 Age: Officially 4+ but a three-year-old should be able to manage it under constant supervision. Even six-year-olds may well have difficulty setting the game up by themselves, though.

Comments: Yep, it's another variation on Ker-Plunk and this is probably the most irritating one yet.

The most obviously annoying thing about it is the length of time it takes to set up. Threading the sticks through the holes takes ages, not helped by the restriction of two sticks of each colour per level. Each turn of actual gameplay is rapid, however, and most of the time spent playing the game is taken up by the supervising parent reminding each child that it's their go and they should really get on with finding and rolling the dice.

Even with close supervision, there always seems to be plenty of careless waving around of the sticks. They're not sharp, as such, but anyone catching one in the face wouldn't be too happy. This being the case, it would be unwise leaving children under seven alone with the game. On the other hand, it's difficult to see children much older than that being entertained by this for long. In Ker-Plunk there's much more skill involved, since any stick can be chosen. In Tumblin' Monkeys there's either a choice from two sticks or no choice at all. What's the point?

Pros:
Cons:
Conclusion: Getting whacked in the chin by Pop-Up Pirate is more fun.

Review : Last King of Scotland
Forest Whitaker is really good,the Scottish doctor is a bit too smiley but plays the part effectively,Gillian Andreson does a good English accent. 4/5. Feel free to expand on my truncated opinions.
p.s. explosions: one in the distance.

I disagree - just finished a few games of Tumblin' Monkeys with my 14 year old - make up your own rules - our last game we had to just whip the sticks out quickly - no mucking about - even after 11 years it still has something to offer!