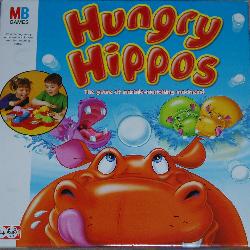 Contents:
Gameplay: Each player puts five balls in the reservoir by their hippo. The first player releases a ball and all the players hammer away on their levers until one of the hippos eats the ball or everyone in the house has a splitting headache. Play continues clockwise round the table with the players taking it in turns to release a ball until all the balls are gone.

Object: The winner is anyone in the vicinity who doesn't require paracetamol by the end of the game. In the unlikely event of a tie, the player with the hippo who's eaten the most balls wins. 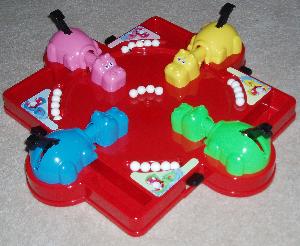 Age: 4+. Younger children enjoy playing with it but it takes a fair amount of rapidly applied force to make the hippos gobble, so kids under four will struggle to play the game properly. (There's the choking hazard issue with tiny children anyway).

Comments: I remember seeing adverts for Hungry Hippos on TV when I was small and I always longed for a set but never got one. This meant I was quite pleased when the kids received the game as a present from their uncle a year or two back. Having children had suddenly paid off and I opened the box with anticipation.

Sadly, the game just isn't as enjoyable as the happy-looking children on the box would make you believe. It's reasonable fun for a bit but it's loud and soon becomes repetitive.

There's some skill involved when only one ball is released at a time but balls regularly come to rest in the centre of the play area out of reach of all the hippos. This leads to a re-release, or more often than not, a partisan nudge by one of the players which, in turn, leads to squabbling. Very few children will be able to restrain themselves to one ball at a time for long, though. Multi-ball madness quickly ensues and much of the game becomes a matter of pumping the levers as quickly as possible and trusting to luck. This has its attractions to children but there's not much longevity.

Hungry Hippos is the kind of game that will be all the rage for an afternoon, lie out untouched for a couple of days and then sit in the box at the bottom of a pile of other games for six months until you insist the kids play it and the cycle begins again.

Conclusion: If you're desperate for a shot but don't want it cluttering the house, buy it for your nieces and nephews and then head round to their house for a go.