Service: Guaranteed eradication of the infestation by a trained technician using techniques tailored to your situation. (Translation: a guy comes round and puts down some poison and then comes back a couple of times to check it's been eaten).

Comments: I caught five mice in a week using standard, Tom & Jerry-style traps and there were more still scampering along the worktops and doing acrobatics down the stairs. Believing things to be out of hand, I phoned Rentokil and got them to deal with the problem. I'm not sure what I was expecting but, for £180, I was kind of hoping it would involve a little robot mouse with lipstick, a skirt and a cargo of TNT.

The guy who came out was friendly enough and gave some decent advice but then proceeded to put a dozen child-proof poison traps round the house. He gave the impression that this was what he always did. So much for tailored service. He came back a week later to check them and not one had been touched. He moved them around and came back after another week. They still hadn't been touched. This was apparently because I'd called him in too late and I'd obviously dealt with the problem myself. I pointed out that there were still mice about. He muttered that I'd already had three visits but agreed to come back after a fortnight. By then, the poison had been nibbled a bit and there'd been no sign of mice for a while.

After the fourth visit, he said he'd give me a call in a week or two to see how things were going. He didn't. A couple of months later, the mice came back. I just moved the poison around a little and they went away again.

The next step would have been sticky boards. The mice run on, they get stuck, someone hits them over the head with a trowel. Since the guy was only turning up once a week, I'm guessing that that someone would have been me. Lovely. 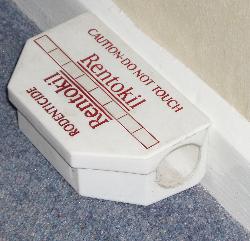 A poison trap. The Rentokil man's most impressive gadget was a metal stick with a hook on the end for reaching under cupboards to put these in place.

The best advice I got was to plug up cracks and gaps in the house with wire-wool (available in B&Q). If mice can get their head through a gap, then they can get the rest of themselves through. The ones I caught had heads about the size of an almond which means they could slip under doors and through pretty insignificant cracks. Knowing this, I seem to have been able to keep them off the worktops since. There's other information on the Rentokil website.

Thanks to everyone at HomeDad for tips as well.

Conclusion: Reassuring but expensive. Next time, I'll do it myself.

Email ThisBlogThis!Share to TwitterShare to FacebookShare to Pinterest
Labels: service

The guidance regarding sticky boards are that they can only be used when other methods have been shown to have failed and they need to be checked frequently, i.e. twice a day. Most pest controller use them only as a very last resort
http://harrierpestprevention.com

Yep, the sticky boards are definitely an act of desperation and you wouldn't want to leave them unattended for long.

RENTOKIL services are not the same as a independent company we have been houses which rentokill have been treating with little or no success one property in manchester had rats coming in using the drains and you could clealy see the entry holes and they failed to spot them ,on the other hand they did kill a few in the house under the floor boards but refused to remove then the house stunk.the cost for the treatment was £280.00 and in 2 months the rats returned because no advice was given how to pest proof by correcting the drain problem www.protecpestcontrol.co.uk

With regards using council to treat for the common house mouse.Yes come councils do not charge for mouse/rats in a domestic house but you get a poor service.We get telephone calls every day saying the council have been three times put baits down and we still have them.The customer asks us to visit when we arrive the same old treament from the council baits not palatable a cheap (pellet bait)would you eat something you dont like the taste off.At protec pest control manchester we only use a seed based formulation which 6 times more expensive to the price of pellet baits.This starts with us getting baits taken within 24hours. we allso advise customer about storing food to help us just simple advice.Dont ask about the council about looking in the loft because you can hear then squeeking in ceiling because that will not happen,just put ladder up and throw baits in,because of health and safety can not walk around loft.BUT they could be in the loft and getting in the cavity and then into the house.we can give you lists of customers not happy with councilservices regarding pest control in manchester but you get whot you pay for in the councils case no charge. htt:/protecpestcontrol.co.uk

It's certainly important to find out exactly what you are paying for when you hire a pest control company. Find out how much they are prepared to do and what the limits of the service are.

We moved into our house a couple of months ago. It's in the countryside. Yesterday morning I opened the cupboard where we keep the dog's 15kg bag of kibble and a little field mouse ran out. I checked with the neighbours and they assured me that previous owners and neighbours haven't had any problems with mice (I believe them).

Hubby wanted to put down a couple of traps but I wanted to make sure everything was done humanely so I called rentokil. A guy came out that day.

He found a few droppings under the units in the kitchen and more in the loft. I know for a fact that the ones in the loft weren't there three weeks ago as we were working up there. So most likely scenario is that a mice (or two) moved in during the very cold spell and found a ready supply of food.

Rentokil guy told us that he would sign us up for the cheapest approach to solving the problem. A year's contract involving 8 visits. Total cost about £400. And I've just looked at the contract and it's a commercial contract (I told him I worked from home).

I feel that we've been stupid...very stupid. But also conned by the rentokil guy. He took advantage of the fact that I was freaked out at the thought of a mouse in my house. But I don't think we can get out of it now.

Sorry to hear about all that, Susan. Certainly I found Rentokil weren't very clear exactly what they were prepared to do for the money.

If they sold you a different contract from the one you were expecting, you should have some come-back. It may depend how hard you're willing to fight, though.

Also, what exactly was their definition of humane? My experience is that the old-fashioned spring-loaded traps are instant and (presumably) painless.

I used to have this problem with rodent. They are all around my house. But I immediately asked for help.

Rentokil never go the extra mile, well unless your a big supermarket or food factory worth thousands of pounds per year to them. I should know. I used to work for them. The training to be fair was excellent. It included everything you needed to know. Strangely beyond the training the emphasis shifted onto sales and making them the extra few pounds. I now do pest control on my own and use their training in a very different way. I go the extra mile and always guarantee riddance. The Rentokil technicians are highly trained but poorly motivated by management obsessed with sales bonuses. If you can find a none cowboy local company your onto a winner. Local companies focus on customer satisfaction to build a good name in their area.

Killing a mice is actually an easy thing to do but knowing where they stay seems to be a little challenging. Though rats are small but they can harm us and our things.