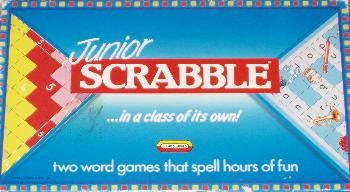 Side 1 (Words and Pictures): The board has a selection of words laid out in a criss-cross grid. Players take it in turns to place two letter tiles from their hand of seven tiles. The tiles must cover matching letters on the board. They can be placed on the first letter of any unstarted word or on the next available letter of a word that's already been partially covered. If a player finishes a word, they get a counter. Whoever has the most counters once all the words are complete, wins the game.

Side 2 (Rainbow Scrabble): This is essentially adult Scrabble with a different scoring system. Players take it in turns to use the tiles from their hand to create a word and join it to the grid on the board. In this version, the different coloured squares on the board are worth different numbers of points. A word scores the combined value of the square next to the beginning of the word and the square next to the end of the word. Whoever has the most points once the tiles have been used up is the winner.

Object: To survive the nightmare. 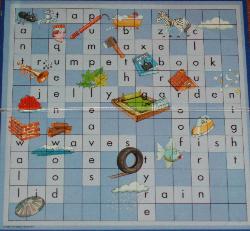 The Words and Pictures board.

Age: Officially 5-10 years but a three-year-old can manage the Words and Pictures game with help. A seven-year-old can just about handle the Rainbow Scrabble game - remember to burn the set and bury the ashes on holy ground before then. 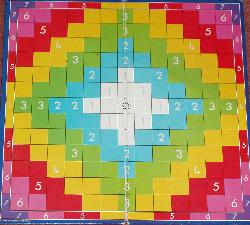 The Rainbow Scrabble board.

Comments: This isn't so much a review as a warning. Board games change. You may think that Monopoly has been the same for thirty years but that's only because you've been playing the same set for three decades. Who knows what it's like if you buy it these days? It probably involves an electronic bank and everyone using credit cards.

Some games are obviously different. I presume that new versions of Trivial Pursuit have updated Entertainment questions. (Scarily, half the Science & Nature questions have probably changed as well. Oh, and quite a few of the Geography ones.) Other games have had their components updated. All of them have trendy new packaging. Some games, though, have been entirely re-worked while you weren't looking. Downfall appears to have been given a 'totally cool' make-over in an effort to stop it working. Even Pop-up Pirate! has different rules than it used to.

Junior Scrabble has had a few incarnations over the years. The current one looks very like normal Scrabble but with a simplified scoring system. That's probably OK. Very old versions have a blank grid with players scoring one point for each letter used. That's not very exciting but there's a good chance it works. The version we have, however, is about twenty years old. It's the version you're likely to find in a charity shop.

Be warned. It's evil. It will suck the very will to live from your body.

The side of the board with the pre-filled grid works fine with younger children who are learning their letters. It hasn't changed much over the years. The other side is a disaster. It's Scrabble but with a completely different scoring system. The lay-out of the board is such that short words score more points than long ones. Playing against a child involves them winning by a mile with words like 'TO' and 'OF' while you have to work hard to create long words in an effort to open up more of the board.

It's all just stupid and totally unnecessary. Since when is the scoring the hard part of Scrabble anyway? Sprog1 is forever telling me what great words he could make if only he had different letters or creating words that he can't join on. He could happily calculate the result of a triple-letter square combined with a double-word score but he struggles to make a word that's more than three tiles long without a whole load of hints. It doesn't help much when the game positively discourages him from doing so.

Next time he demands to play this, I'm going to suggest adult Scrabble. It's still not going to be much fun for a year or two but at least it's not broken.

Conclusion: If Dracula calls round with a copy of this and offers you a quick game, don't invite either of them into your home.

try Equable. about as frustrating as junior scrabble, only miles more boring for all concerned. I'm waiting for the algebra version...

Ah... So that's what you get if you cross Scrabble with long division.

If I ever see a copy in a charity shop, I'm going to buy it and immediately destroy it, simply to make the world a better place.

Nothing beats a good charity shop bargain - as long as it is actually a bargain and it isn't Junior Scrabble.

I'm currently on a hunt for Fighting Fantasy books.