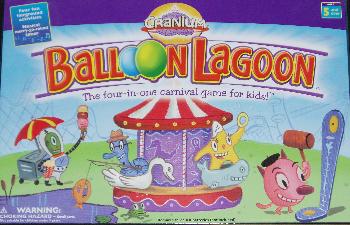 Contents:
Gameplay: On their turn, each player spins the merry-go-round and plays the fairground game it points to. Pressing the big button on top of the merry-go-round starts a tune and the player has until the tune stops to complete the game. Depending how well they do, they receive between zero and four little plastic balloons to stick in their playing piece.

The four fairground games are:
Object: To be the first player to fill their piece with balloons. 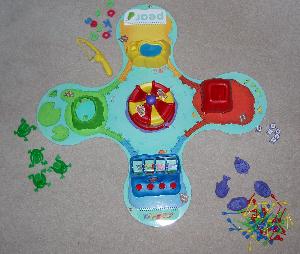 Game length: Somewhere between five and ten minutes per player.

Age: 5+, according to the box. This is probably about right - younger children need help to play. On the other hand, a four-year-old playing a five-year-old will be a more even match than a five-year-old against an eight-year-old. The games involve just enough skill to ensure an older child or adult will almost always win if they try. 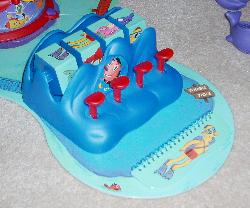 Comments: All the fun of the fair without the risk of winning a goldfish.

Well, maybe. More like all the fun of a village fete.

Where it rains a lot and they've run out of candyfloss. I grew up in rural Norfolk - trust me on this... 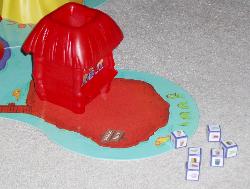 Balloon Lagoon has lots of colourful parts and interesting appearing pieces but there's really not much to it. There's no traveling round the board or interaction with the other players. It's simply a case of taking it in turns to play the fairground games. One of the games is basically rolling dice, one is a simple magnetic fishing game and one is a slot-machine with a lever for each reel. Given long enough, winning any of these three would be merely a matter of persistence. The time limit means that speed and a little concentration are essential. The other game, meanwhile, requires plastic frogs to be jumped into a pot and is vastly more difficult than the other games. Even adults need some practice to beat it and younger children find it impossible. 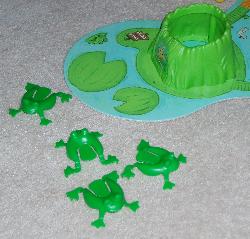 As with Scooby-Doo! Cyber Chase, the mini-game format is very attractive to children but the challenges themselves are somewhat lacking. Also, the single tune played by the timer quickly begins to grate. You could have more fun bouncing a ping pong ball into a jam jar or rolling marbles into a circle chalked on felt or dropping ten pences into a bucket of water in an attempt to cover the five pences at the bottom. 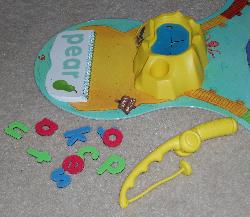 Conclusion: Looks more entertaining than it actually is. You know, like Great Yarmouth.