Rated: 12+ but, to be honest, this seems to be more to do with the controller being vaguely gun-shaped than anything else. There's no gore and you don't get to shoot people - it's mainly shooting targets, goblins and skeletons. None of the enemies are scarier than the zombies you have to slap around the head using an EyeToy in Sega Superstars and that's rated 3+.

Story: Theory 1 - Nintendo are trying to hide the fact that their latest peripheral is merely a bit of plastic by packaging a game with it.

Theory 2 - Nintendo are trying to hide the fact that their latest game is very short and mostly recycled by packaging a bit of plastic with it.

Theory 3 - Nintendo are too busy counting money to bother hiding anything any more. This will all look like a bargain in a few months time once a motley bunch of other developers have knocked out a stack of full-price 'zapper compatible' games that aren't as good and don't come with a bit of plastic.

Gameplay: Shoot things! There are nine levels split into three stages each. Each stage is a minute or so long. Some stages simply involve pointing the cursor at targets and pulling the trigger. Some require you to turn on the spot to find targets by pointing off screen. Others involve using the control stick on the nunchuk to move about and hunt down targets. Holding down the z-button zooms the view; holding down the trigger charges up an explosive crossbow bolt. A bronze, silver, gold or platinum medal can be earned with a high enough total score on a level. Get a bronze medal and the next level is unlocked.

Save System: Automatic save after each level. 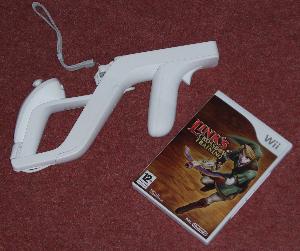 Comments: There are two ways to set up the zapper. The first involves clipping in both the wiimote and nunchuk, the second involves just clipping in the wiimote and holding the nunchuk normally. Neither is very good. Using the zapper with both hands, the trigger is too near the front end of the 'barrel' for the experience to feel natural, and it's not balanced properly for one-handed use, making aiming a constant battle against wrist strain. In both cases, the zapper is more unwieldy than holding the wiimote normally. It's also harder to reliably point at things. This is not a good start.

On top of that, the zapper doesn't work like a traditional lightgun. Rather than point where you want to shoot, you move the zapper to direct an on-screen cursor. There's a calibration screen in Crossbow Training that makes it possible to more closely match the position of the cursor with where you're pointing but it's not hugely convincing and is dependent on where you're standing. (I found I had to be a long way back from my TV). Unlike a lightgun, looking down the zapper to see what you're shooting is a complete waste of time. It's all about the cursor.

Essentially, the zapper doesn't feel like a gun, doesn't work like a gun and is less accurate than the wiimote on its own. You have to wonder what the point is.

Oh, and the plastic hinge on the clip that locks the nunchuk in place seems very flimsy.

If you've played Twilight Princess, then your first reaction to Link's Crossbow Training will be deja vu. Locations, enemies, sound effects and just about everything else have been entirely re-used. Considering how tired Twilight Princess felt at times, this is a problem. Unlocking new levels is a bit like opening your Christmas presents only to discover that they're last year's gifts that have been rewrapped.

Crossbow Training is also very short. Unlocking all the levels doesn't take much more than an hour. Getting a large haul of decent medals takes another hour. Obtaining platinum on every level will take longer but is liable to result in as much frustration as fun thanks to the scoring system. Shooting a target gives a set number of points but this is multiplied by the number of successful hits in a row. So, if there are 10 5-point targets, the first is worth 5 points and the last is potentially worth 50 points. One missed shot half way through a stage resets the multiplier and halves your overall score compared with a missed shot at the beginning or end of the level. This means platinum medals are as much about patience and memorisation as accurate aiming.

That said, Crossbow Training is enjoyable to play in quick bursts and the short levels make it addictive. The need to maintain a string of hits adds some depth, forcing constant balancing of risk versus reward. Is it worth trying for a difficult, distant target at the possible cost of a carefully built up x40 multiplier? As a demo game for the zapper, Crossbow Training is pretty decent. It's at least as good as Wii Play.

Wii Play is only an extra £5 on top of the cost of a wiimote, however. Since the Zapper/Training package costs £20 and the zapper doesn't really seem worth much more than a fiver itself, something doesn't entirely add up. True, the zapper can be used with other games but, if it doesn't work that well with this, what are the chances of it working much at all with anything more complicated? Most of the buttons on the wiimote are hard to get to and motion-sensing would be a real pain. (Apparently, these are issues even with the relatively basic Resident Evil: Umbrella Chronicles.)

Conclusion: Link's Crossbow Training is mildly fun for an hour or two but the zapper doesn't add much to the experience and is pretty uncomfortable.

Graphics: All the locations are ripped wholesale out of Twilight Princess. Everything looks nice, but way too familiar.


(Does the link suggest you spend more than £20? If so, just laugh and move along. Oddly, you might do better searching in the shops than online.)