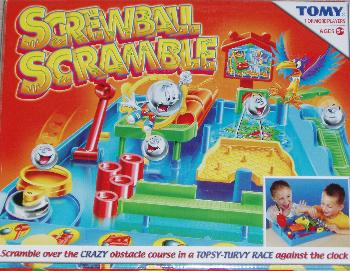 Object: To reach the end of the course as quickly as possible without the ball falling off.

Game length: Roughly a minute but it depends how much practice the player has had. Typically, grandparents will take all afternoon. As a kid, my record was twelve and a half seconds.

Number of players: Realistically, one. The instructions suggest taking turns to compete for the best time but that's almost certain to end in a scuffle if the players are children - they'll argue over what constitutes a turn and then accuse each other of cheating. No, this is all about one joystick ninja versus the machine.

Age: 5+ but even a six-year-old is going to have to put in plenty of practice before they make it all the way round. Playing it properly is probably beyond anyone much younger. They'll still enjoy hammering away at the controls to see what happens, though, and the game is durable enough to cope but you'll need to keep an eye on the ball bearings (choking and missile hazard!). 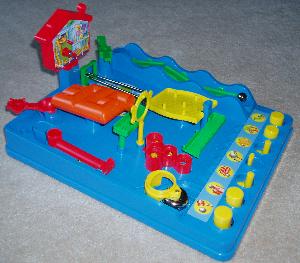 Comments: I had one of these as a child and really loved it. I suppose it's rather like a mechanical version of the platform games I was playing on my VIC-20 a couple of years later - simple, colourful and rock hard. Fortunately, however, it doesn't take five minutes to load off tape.

The boys, who have been born into an age of casual gaming and get impatient in the time that it takes a DVD player to spin-up, had a few goes at Screwball Scramble and then complained that it was impossible.

"Pah," I muttered and shoved them aside. "Impossible? I could do the whole thing in twelve and a half seconds when I was your age. Let me show you how it's done..."

Back in the day, I considered myself as something of a Screwball Scramble master. I rolled my shoulders, flexed my fingers and then launched the ball bearing on its way.

It turned out to be harder than I remembered. It was about a minute before I got the ball up the first walkway and, even then, I promptly rolled it right off the edge of the course and had to start again. I'm a little out of practice. The boys had wandered off to play Mario Party by the time I'd even made it to the second maze. I need to put in some serious training before the world championships.

My children do play Screwball Scramble occasionally - a loud toy with lots of buttons is always attractive - but, when I was young, the main draw was always attempting to shave a second off my record. I spent hours honing my skillz. Stupidly, however, the version we have now has no numbers on the timer and the divisions on the dial are obscured by the hand as it passes. This leads to confusion and a margin of error of two or three seconds. This takes away much of the incentive for repeat play. 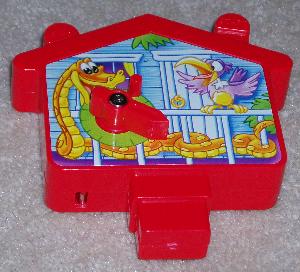 Honestly... Imagine if they used one of these in Beijing next year.

Maybe best reserved for an obsessive only child...

Conclusion: Fun for a little while but sloppy time-keeping wrecks Screwball Scramble's struggle for Olympic recognition. My dreams of gold medal glory are dead.