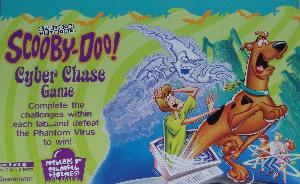 Contents:
Gameplay: Players take it in turns to spin the spinner and move round the board the indicated number of spaces. They must stop at the corners of the board to complete challenges in order to collect snacks. If the spinner lands on the magnet rather than a number, the player doesn't move but receives the magnet card from whoever currently has it. 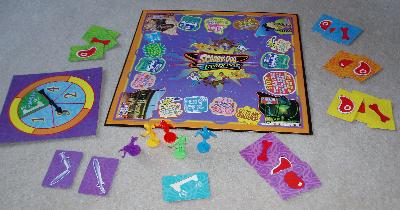 Object: To be the first player to make their way back round the board to the start with all three of their snacks and the magnet.

Age: 6+ officially but that's probably because most of the squares have written instructions on them. To be honest, though, even if you can read, the directions don't make much sense. There's no skill or strategy involved, so a three-year-old can play, given a little supervision.

Comments: There's the basis of a good game here somewhere. The idea of going round the board taking part in challenges to win prizes is great. Unfortunately, the realisation of that idea is somewhat lacking...

The instructions are unclear and confusing, the design is dreadful and the challenges are desperate and dependent on luck. The best thing in Cyber Chase is the picture of the Scooby Gang in the middle of the board. Everything else about the game looks and feels cheap. The board itself is sturdy but covered in dreadful artwork (most of which has little to do with Scooby-Doo!). The 'cards' are thin, basic and a little pointless. Even the playing pieces are moulded from such shiny, garish plastic, it's difficult to make out the lumpy detail. This is probably for the best, though - Velma looks like the granny in Tweety and Sylvester.

All in all, this would be a worthwhile bonus if it came free in a box of Cornflakes but, even if you see it somewhere for a fiver, think carefully before paying for it. 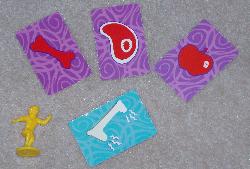 That white thing on a blue background - that's a magnet...

Conclusion: If you have any creative talent whatsoever, you could make a better Scooby-Doo! board game than this (particularly if you already have the 3D game and re-use some of the pieces). You could even have proper Scooby-Doo! challenges like hiding in a barrel, gargling the original theme tune or eating a fifteen layer sandwich in one mouthful. Failing that, you could just get the kids to throw beanbags into a bucket while watching a Scooby DVD. It would still be better than Cyber Chase.

Surely it should come with a free packet of Scooby Snacks!

Yep, might be worth playing for a Scooby Snack.

The game is dire, even for kids. However pick it up second hand for pennies and chuck the game but keep the plastic miniatures. I'm using the miniatures in a Scooby Doo variant of Cluedo ( Clue ). I've posted the rules,cards and print and play miniatures in the files section of the Cluedo page at Board Game Geek. Here's the link.