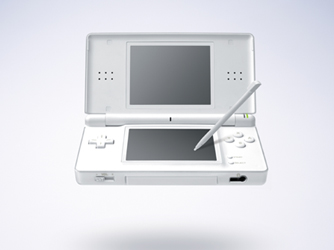 Price: £100 for the DS Lite. (The older, chunkier version is £90 but isn't widely available any more). You should be able to pick up the console with a bundled game for an extra £10 or so.

Extras:
Comments: There was a conspiracy theory going around when the DS first came out that it was really just something Nintendo had cobbled together in a bit of a hurry to distract some attention from the fast-approaching PlayStation Portable and give them a little breathing space to design a machine that out-classed Sony's offering. Where were the multi-media capabilities and the cutting-edge graphics? Why did the games come on expensive cartridges rather than cheap discs? What was the point of downloading stuff over wi-fi if there was no way of storing it?

Sure, the touchscreen interface was a good idea but why two screens? Nintendo said it would encourage innovation. Great gaming minds considered the possibilities. They pondered wonderful new gameplay. They thought long and hard, and then, as one, developers around the globe hesitantly murmured, 'Well, you know, you could play the game on one screen and have a map on the other.'

Sony executives must have been pretty pleased. Their machine was obviously technically superior, could play music and movies and had all kinds of games from Wipeout to Grand Theft Auto lined up. What did Nintendo have? A gimmick-laden oddity with Mario, a brain training non-game and a dog-owning simulator. Sony must have thought they'd have an unassailable lead in the handheld console war by the time the proper Game Boy Advance 2 turned up... 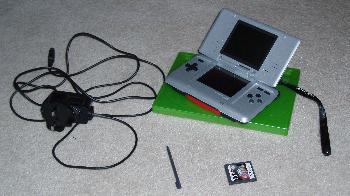 An original DS, charger, stylus and game cartridge. DVD box for scale. (I would have used an original DS for scale, like I normally do, but I only have the one...)
Funny old world, isn't it?

Hardcore gamers and gadget freaks bought PSPs but their mums all bought DSs. And so did everybody else. If there ever was a GBA2 being secretly prepared in Nintendo HQ, then it's been indefinitely shelved. The DS has easily beaten the PSP in terms of sales, and soundly thumped it in terms of profit.

By keeping things simple, the DS reaches out to people who haven't played games before and to those who haven't played games in years. Its software line-up is laden with fun, colourful platformers, puzzle games, turn-based strategy games and tongue-in-cheek cooking simulators. These are supported by familiar franchises such as pokemon, Mario and Zelda which lure in the traditional Nintendo fans.

If you like the kind of game where you use big guns to shoot terrorists or you want a decent racing game which doesn't involve Mario in a kart, then the DS isn't for you. Indeed, even if you just like games with three dimensions, you're going to be fairly disappointed. The graphical capabilities of the DS would struggle to compete with the PSOne, let alone the PSP.

The appeal of the DS is the control system, however. It has plenty of buttons but the lower of the two screens is touch sensitive and can be worked using a stylus or a thumb strap. A few games miss the point, requiring the use of all the buttons and the touchscreen which really only works for those people with three hands but there are other games which are controlled almost entirely with the stylus. Chess pieces can be moved round the board with a couple of taps, for instance. In Trauma Centre, the stylus is used to perform surgery, lending itself to cutting, stitching and injecting. In general, though, games utilise the stylus to make control easier rather than to add significantly to the gameplay. Being able to use a pen rather than having to get to grips with a load of buttons is very appealing to gaming newcomers.

The DS has a few other nifty features. Closing the lid puts the machine into battery-saving sleep mode. In normal use, the rechargeable battery lasts eight hours or so but the DS can maintain itself in sleep mode for days. This means it's perfect for a quick go on the bus - there's no need to worry about finding a saving point before reaching your stop. Close the lid and it can go straight in a pocket. (The screens are also much easier to see clearly in sunny weather conditions than the PSP screen).

Some games (notably Mario Kart Super Circuit and Metroid Prime: Hunters) feature online play over a wi-fi internet connection. Metroid even has an option for voice chat. Other games allow local wireless multiplayer, so you can play with other DS owners in close range. In some cases, only one player actually needs to have a copy of the game.

The DS is backwardly compatible with the Game Boy Advance, providing access to a vast catalogue of old games. (Sleep mode doesn't work with GBA games, however).

The newer version of the DS, the DS Lite, is smaller, lighter and has adjustable screen brightness. It's slightly more expensive but is definitely the version to get. The only disadvantage of this version is that GBA cartridges don't fit snugly and protrude slightly from the bottom edge of the console. To make up for this, the DS Lite has a built-in cover for the GBA slot when it's not in use.

All in all, the DS is a great little machine. Whether you should get one, though, depends on whether you like the sound of the games. You really need to be a fan of cute platformers and puzzle games to get the most from it.

It's also worth pointing out that the decent games have maintained their price over time so don't expect to hoover up a load of old games at a bargain price. Mario games still typically cost £25 new - and that's online. It's £25 for a second-hand copy in the high street.

The best games include:
Other good games include: Freshly Picked: Tingle's Rosy Rupeeland, Advance wars: Dual Strike, Animal Crossing: Wild World, Tetris, Nintendogs and a zillion platformers, such as Yoshi's Island and New Super Mario Bros. There's a startling lack of games developed by western studios, though. The DS would be perfect for real-time strategy, point-and-click adventures and some Tolkien-esque role-playing action but has almost no software in these genres.

Conclusion: The DS is great but it's not for everyone. If you want to play movies, music and portable versions of PS2 games, then you should get a PSP. The DS is about less adrenaline-fuelled games - the kind of games where you train a puppy. It's also cheaper, more rugged and has a much wider range of titles suitable for children.

On the DS if you buy an R4 card you can play music on your ds and also movies/ video clips but i have not yet tested the video part ;)