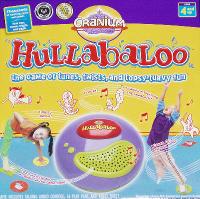 Gameplay: The pads are spread around the room and the Hullabaloo switched on. The Hullabaloo then tells the players what type of pad to stand on, such as a square one or a red one or one with a picture of a musical instrument. It also tells them how to get there e.g. spin, zoom or skip. Occasionally there are extra instructions like making a funny noise or touching more than one pad at once. This continues for a variable length of time.

Object: To be standing on the lucky pad chosen randomly by Hullabaloo at the end of the game.
Game length: Under three minutes. The Hullabaloo automatically plays several games in a row but it can be switched off at any time.

Number of players: Officially 1-6 but more than one player can stand on each pad so a larger number of players is possible. If you have a big room and are confident in your first aid skills you could go for a dozen. 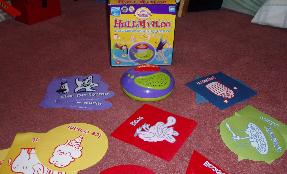 Age: Officially 4+ but most three-year-olds will manage it and most two-year-olds will think they can. Children over seven will probably be too cool to play. Adults will prefer to be slightly tipsy.

Comments: If your kids are jumping around the room and bouncing off the walls, this is a great way to get them doing it in a more structured and educational way. The only problem is with understanding what the Hullabaloo is saying. It plays music constantly and speaks with an American accent, making it difficult for children to make out the instructions. An adult is required at all times to interpret. This is a shame as the adult nearly always ends up having to join in and leap and crawl and zoom when they'd much rather be trying to catch a quick nap on the sofa. 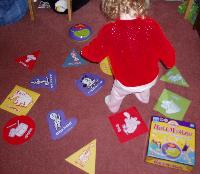 The spoken instructions are hard to understand.
Sometimes the instructions involve the players touching their noses to a pad. If the players in question are small children with colds then things can get pretty unpleasant...

The game is amazing, search for it here.