Contents:
Gameplay: The first player puts the saddle on the mule and then the next player attempts to hang or place an item of baggage on the saddle. Play continues round in a circle with players taking turns to load further items onto the mule. Anyone dropping an item, knocking one off or causing the mule to buck is out of the game.

Object: To place the final object on the mule without making him buck or to be the last player still in the game.

Game length: Often under a minute. 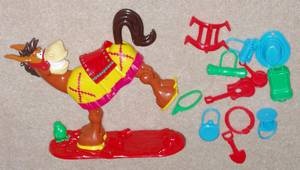 Comments: When I was a kid, I had a Jaws game which involved fishing pieces of junk out of the spring-loaded mouth of a model shark using a crochet hook. The weight of the junk was the only thing which kept the mouth open and so the shark was bound to bite eventually. The trick was in knowing when to take a large item and leave everyone else in the lurch, and when to play it safe and take the smallest object going. The game was tense, fun and always ended with someone getting their fingers snapped at.

Jaws was clearly inspired by Buckaroo!. Buckaroo! was the game everyone knew about, that had the TV ads and that flung stuff across the room. In short, it was the game the cool kids had. As a result, I felt somewhat short-changed.

That said, I never played Buckaroo! as a kid and I had no idea what it was really like. As it turns out, I had the better game all along...

This new version of Buckaroo! has three sensitivity settings for the mule but it's pretty hard to make the thing buck even on the twitchiest option. In contrast, hanging multiple items off the saddle is pretty awkward. Players are vastly more likely to be out through having something slip off as they put it on than through the mule bucking. This is something of an anti-climax.

After a little practice, older children will have little difficulty piling on all the items, making the winner dependent on when the objects are depleted. In a two-player game, if no one is knocked out, the person who goes second will always win. Bearing this in mind, it's crazy that the rules specifically state that the youngest player is supposed to go first - it puts them at a huge disadvantage. (And that's before taking into account that placing the saddle correctly is the hardest part of the game.)

Things can be improved slightly by changing the rules so that each player starts with a share of the objects to load and gets to add anything they drop to their pile. The winner is the first person to get rid of all their stuff. The lack of bucking means the game still isn't that fun, though.

You'd be much better off with the very similar Bounce Bounce Tigger Game. Personally, I'm off to search my parents' loft for Jaws.