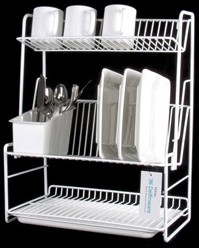 Cost: £36 for the version coated in white plastic. £60 for stainless steel.

Comments: I've never really been sold on the idea of having an automatic dishwasher. When I was growing up, my mum always seemed to be loading or unloading hers. Stuff needed rinsed before it went in, there was usually some sort of Tetris-style challenge to make everything fit and she still had to do a load of washing-up herself to deal with large or delicate items or things which she needed in a hurry. Putting the machine on after tea left a fun load for her (or me!) to put away before bed. Even when I helped fill it, she quite often seemed to have to entirely re-arrange the contents afterwards. The machine simply didn't seem to save much time overall and occasionally broke down in spectacular fashion. (Although the same could possibly be said of my dad now she's finally taught him to help but at least he's company...)

I just haven't had much desire to own one myself. Then again, that's maybe because for the last ten years I've been using one of these dish racks. It can hold a day's worth of crockery from a family five, so I seldom have to do much drying. This halves the time it takes to do the washing-up by hand. The rack is so strong and accessible, I don't even have to bother unloading half the stuff - I remove things as I need them and only put away what's left when it's time to wash-up again. It's tempting to buy a second one and use them in rotation so when it comes to washing-up time, one's empty and the other's full of dry stuff to use.

(Actually... Our local ironmongers is closing so I've already panic-bought a spare one and put it in the loft, just in case anything happens to the first. Perhaps I should go get it...)

The manufacturer's photo above is all very well at showing the sort of thing the rack will hold but it doesn't give much idea of quantity. They clearly weren't trying: 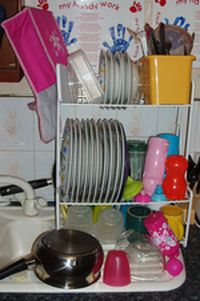 Honestly, it's great. The only downside is that if anyone offers to help with the washing-up there won't be much for them to do except stand around getting in the way. Get them to go clean the shower or something.

Conclusion: The best dish drainer ever.

Just discovered that the 'links' section of the Delfinware website gives some online suppliers.