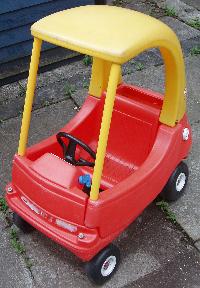 Contents: Sit-in car with:
Age: 18 months to 5 years officially, but larger five-year-olds will need levered out with a shoehorn.

Comments: Every parent and toddler group has one of these and the kids always fight over it. Usually, the first child to arrive will install themselves in it and trundle around all morning, refusing to ever get out. They scream if another child even looks at them sideways. If you're lucky, the child's parent will drag them out bodily at some point, leaving every other child in the room to battle to be last last-toddler-standing as they mob the vacated toy. If the parent is oblivious or has dozed off, you have to teach your own kid to carjack - it's a toddler-eat-toddler world out there.

Given the above, these are obviously highly desirable items. We picked one up second-hand, thinking it would be great. Unfortunately, although they work well in a church hall, Sproglette struggles to make the the thing move over the slightest crack or bump on the slabs behind our house. It's heavy and it's harder for the rider to get leverage than it is with the kind of ride-a-long vehicles where the child sticks their feet out to the side. I end up having to push. This is far too much like hard work (and not good for my back). Also, sometimes her feet get caught underneath. 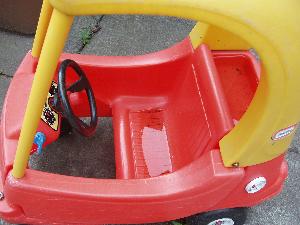 There's a new design that's less chunky but it looks fairly similar. This is the version all the local toddler groups have. (Their ones are normally less damp.)

There's nowhere near enough room in the house for us to have it inside and it would take up half the shed if we put it in there. This means it has to sit outside in all weathers. The stickers have dissolved. The seat collects a layer of slime pretty quickly and the back shelf always has two inches of water in it. I take a couple of minutes to clean it up, Sproglette gets in, she moves six inches and then gets stuck. I push it along the path for fifty yards, her foot gets caught, I extricate her, she gets out and then she walks home. I have to push the empty car back to the house.

This isn't entirely how I envisaged things when we bought it.

Sproglette is very proud of the car, though. She points out the window and says, 'That's my car!' It also serves as somewhere for her to sit and eat biscuits.
`
Conclusion: Fantastic... if you have your own ballroom. If not, you should leave it for parent and toddler and work on your child's carjacking skills.