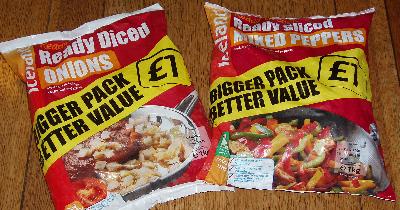 Price: £1 for a 1kg packet of frozen diced onion or sliced, mixed pepper.

Comments: I vaguely remember that I used to cook. I'd select a recipe, buy the ingredients and lovingly craft a meal. The results were usually quite tasty.

Now I don't cook - I merely prepare food. The kids won't eat much besides sandwiches and raw fruit and vegetables. It's a suitably nutritious diet but it doesn't involve much culinary skill.

For logistical reasons, my wife and I don't eat until after the children are in bed. I'm tired and hungry by then, so I want the food to be pretty much ready the moment Sproglette's light goes out. This means trying to concoct something while simultaneously overseeing the bedtime routine. It's usually easiest to to close my eyes, rummage around in the freezer and shove whatever comes out into the oven. This doesn't work so well with ice-cream but the results are nearly always tasty enough and much, much quicker to obtain than preparing stuff from scratch.

These packs of chopped onion and pepper have made a difference, however. They've made 'proper' cooking seem possible again. I can bung some in a pan and I'm halfway to a meal already, without having to faff around in the manky depths of the drawer at the bottom of the fridge. It's a great way to make mince more interesting. A bit of meat and chilli becomes fajita filling. Add cheese and a couple of eggs, and it's an omelette. Almost anything can be bulked out and jazzed up.

I've even taken to sprinkling some in with the cheese when making toasties. Mmmmmm...

Conclusion: It took me a moment to locate these in the freezer cabinet at my local Iceland store the other day. The mere thought that they'd been discontinued made me freak. (Hence the review. Everyone go buy some NOW, just to make sure they keep stock levels high.)