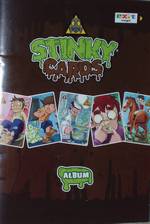 Contents:
Gameplay: It's a cross between Panini football stickers and Top Trumps. Children can simply trade with each other in order to complete their collection or pit their cards against each other.

Each card has ratings for 'Funny', 'Joker' and 'Stinky'. One player chooses a rating category and the player with highest value in that rating on their top card wins the round and the cards. They put the cards at the bottom of their deck and choose a rating from their new top card. This continues until one player has all the cards or a fight breaks out.

Object: To have all the cards and/or freak friends (and relatives) with stinkiness.

Age: Anyone can play but there's a good chance that only seven-year-old boys will want to...

Comments: Scratch'n'sniff technology has moved on since my day. When I was a kid, a concerted scratch would result in a vague whiff of strawberries if you were lucky. (Well, strawberry flavouring anyway.)

Based on this experience, I gave the garlic Stinky Card a good going over with my fingernail, put it next to my nose and inhaled deeply.

Then I nearly passed out.

Make no mistake, these are stinky - so much so that even my two boys became wary of them pretty quickly. Sadly, I didn't learn quite so fast. Sprog2 (aged 7) shoved one under my nose and said, "Smell this, Daddy!" I inhaled instinctively. It was the garlic again.

If I'd been a vampire, I'd have crumbled on the spot but, as it was, it took me several hours to get the taste out of the back of my mouth. I avoided pasta sauce for a couple of days...

The game itself isn't as good as Top Trumps, due to the small number of ratings. There's also the issue that if two kids face-off using their own collections, one of them could lose the lot. Even if they agree not to play for keeps, the collections are going to get shuffled together, so sorting them out at the end is liable to lead to arguments.

Still, the collection element does produce a desire to catch 'em all which is as strong as ever with stuff of this sort. Seven-year-old boys can also earn some playground kudos from the grossness factor.

A word of warning, though. If your kids get a whole load all at once, don't let them sort through them on the lounge carpet unless you have some Febreze handy... 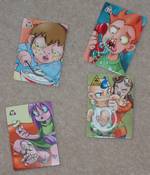 Conclusion: Panini, Top Trumps and an unpleasant odour. The perfect gift for your
nephews.

I BOUGHT 2 PACKS AND NONE SMELL

i got 3 stinky ones that did not smell

were buy them from

there for sale on ebay full boxes of 24 packs for £9.99 thats a bargain as there suposed to be £1 per pack, babyellie2006 is the seller