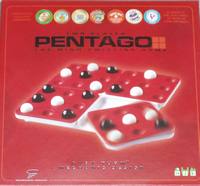 Contents:
Gameplay: The first player places a marble on the board and then rotates one of the four sections 90 degrees. (The rotation can be in either direction and doesn't have to be on the section where the marble was just put down.)

The other player does the same. They then continue to take turns until the board is full or one of them gets five in a row (before or after a rotation).

Object: To be the first player to get five marbles of their colour in a row. (If both players get five in a row at the same time or the board is filled without a row being formed, then the game is a draw.)

Game length: A few minutes. It depends how good the players are and how long they spend staring at the board in mental anguish before each turn.

Comments: Playing Noughts and Crosses with children can be hard work. It's a simple concept which requires only a scrap of paper and a pen but the parenting questions involved are tricky. Do you let them win sometimes or beat them mercilessly until they figure out the awful truth like the supercomputer in WarGames? The second option will probably take rather a long time and involve whining. The first option will just encourage them to want to play some more until you start wishing for global thermonuclear war and go for Option 2 anyway.

The alternative is to try Pentago. It's essentially Noughts and Crosses with far more variables. The simple goal is there but it's much harder to keep track of possibilities and strategies. Even though a draw should theoretically still always result, this doesn't often happen. It's too easy to miss a cunning turn or unexpected line. This being the case, games between experienced players are head-scratching duels. Throwing a game to stop a five-year-old whining, meanwhile, doesn't feel like causing them to miss out on an important lesson on the nature of futility (and the importance of nuclear disarmament).

The only downside is that games take three or four turns to get going and then can end depressingly quickly after that if one player slips up. You'll have to get the family playing a tournament if you want to fill up more than a few minutes.

The board itself is very sturdy and the marbles are pleasantly weighty and shiny. The cardboard box is excessively large, however.

Conclusion: Fun to mess about with. Scarily harder than it looks to play well.