Contents:
Gameplay: An adult reads the assembly instructions in an increasingly bemused fashion as children jump around the room asking questions and offering advice. The adult starts putting stuff together. The children commence wrestling and knock everything over. Shouting ensues.

If it is the first time the game has been played, bedtime may arrive before play progresses any further.

Once the board is complete (with three traps and a flushing toilet in the centre to release the balls), the playing pieces are lined up in front of the sweeping broom trap. This is then set off and the player whose piece is launched furthest across the room goes first.

Players take it in turns to roll the dice and move the indicated number of spaces. Landing on a trap space is rewarded with two pieces of cheese but requires the toilet to be flushed, setting off one of the three traps at random. Mice that are caught lose a piece of cheese and then the trap is reset.

There are a few special spaces but the branching pathways on the board mean that only the 'Go to next trap' ones see much use. 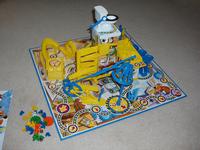 Object: To be the first to collect eight pieces of cheese.

Game length: 10-30 minutes, depending on the number of players and how lucky they are. (Don't forget to add set-up time.)

Age: 6+ but a four-year-old can easily play with adult supervision. Even ten-year-olds may need adult help with setting-up.

Comments: We had to give the kids extra coaching on being grateful this Christmas. Sproglette kept stamping her foot and throwing a tantrum if she opened a parcel and found something she didn't like. Even if she did like what she got, she kept demanding more. Sprog1 did much better - he was polite and enthusiastic about whatever he got... before discussing at length whether it was identical to the version he already had. Sprog2 opened stuff, shrugged and wandered off.

We really had to work on their thank-yous, fixed grins and innocent enquiries about receipts.

Of course, when Sprog2 unwrapped Mouse Trap!, they were all genuinely pleased. It was me who had to maintain a forced expression of delight.

You see, they already have an older version of Mouse Trap!. It's dull, fiddly, infuriating, tedious and one of Sproglette's favourite games. As such, it will be amongst the first things I take to Oxfam as soon as the kids leave home. Honestly, I'd much rather do the washing-up than play it.

I wasn't exactly thrilled to get a new set that's so different from the original we've ended up keeping both of them. I haven't had to play them one after the other yet but I'm sure it's only a matter of time...

The new version is at least a lot more fun to play than the original. The traps are functional right from the start and each player gets a few shots of setting them off. This is a major improvement. There's also a little bit of strategy involved in choosing which way to go when the path round the board splits.

Unfortunately, a whole new load of problems have been introduced:

Setting the game up for the first time takes forever and is definitely a night-before job. Even on subsequent assemblies, it's still a significant task. Allow a minimum of five minutes and make it ten if you've got 'help'. 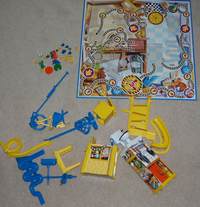 How does this go back together again?

The rules are fairly long and unnecessarily complicated for something that's in reality little more sophisticated than Snakes and Ladders. (Allow another five minutes for looking over them.) Various spaces send mice backwards or forwards, with or without setting off the traps or gaining cheese. It's also possible to obtain a spanner to briefly clog up one trap but it's usually not worth taking a detour to collect. The most effective tactic is nearly always to avoid the additions and head straight for the traps.

One side of the instruction sheet.

On a more basic level, the playing pieces fall over all the time, the broom isn't wide enough to launch all four of them at the start and the cage trap is (amazingly) more fiddly to set than in the original.

The biggest issue, however, is that it's very hard to see where you're going. The traps are so large and solid, choosing a path requires constant peering and bending and bobbing about in an effort to see the path. Since a lack of spaces means a roll of six can lead to a trip halfway around the board, almost every shot is a spine-twisting contortion. Mouse Trap! is the first board game to give me a bad back.

Conclusion: More fun to play than the old version but the overall experience isn't much better.

Very accurate can totally relate! Would you mind posting a copy of your instructions onto internet as mine have got 'misplaced'. Many thanks.

There's a run down of the rules if you scroll down the page here:

Mouse Trap (with a toilet) rules.

Hope that helps. Posting the actual rules in a readable size would be difficult (plus an issue with copyright!).