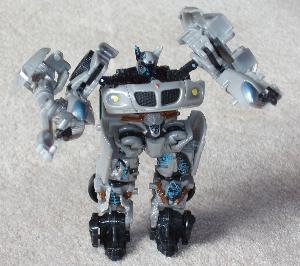 Price: £15 but there's a good chance that your local toy shop will have a bargain bin full of these, along with Dr Who cat people and little plastic pirates that vaguely resemble Johnny Depp. (The Keira Knightley action figures are all gone - sorry...)

Contents:
Age: 5+. This seems about right. Any child under five is going to struggle a lot getting the thing to transform. (As opposed to everyone else, who will only struggle quite a bit.)

Comments: I never had any Transformers toys as a kid but I always kind of hankered after them. It's a robot and a car! Wow! (I'd rather have had an Imperial AT-AT Walker, obviously, or that Action Man death-slide or a Big Trak, but I certainly wouldn't have minded finding Megatron and chums under the Christmas tree.) I did get to borrow a friend's Transformer once. I remember it being chunkier than this one and, well, a bit easier to transform, to be honest. A handful of twists and you were done.

Those days have apparently gone the way of Big Trak and decent Star Wars films...

Sprog2 got Final Battle Jazz for his birthday and had absolutely no clue what it was. The recent movie is rated 12 so he hasn't seen it and he wasn't aware of robots in disguise. He put the unopened blister pack on the shelf and forgot about it. I was tempted to show him the toy in operation but, realising it might be tricky, I waited until the evening and then tested it out. (Purely for research purposes, you understand...)

The diagrammatic instructions were incomprehensible. ('You fold what where now?') After about five minutes, I'd got this far: 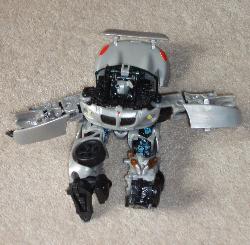 The joints were stiff but everything else felt somewhat fragile. I was constantly afraid I was going to snap a bit off while attempting to get the hinges to function properly. This wasn't helped by the fact that I wasn't entirely sure what the proper functions of most of the hinges actually were.

Another ten minutes got me to here: 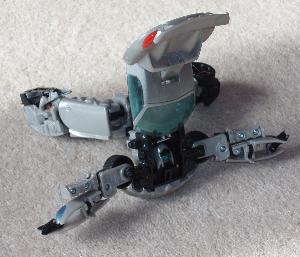 This was not a good place to be. Five minutes later, I was back to here again: 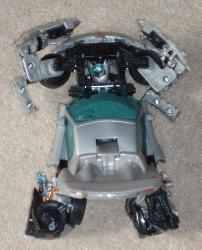 The end seemed in sight.

By this point, I'd realised that some of the hinges really did need a large amount of force and that, luckily, the toy wasn't as fragile as it felt. I yanked it around some more until, at last: 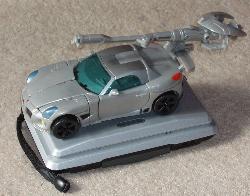 My thumbs were very sore but I was done. I sighed with relief and then considered turning it back into a robot now that I'd 'got the hang of it'. Thankfully, I resisted this urge and went and got a beer. I left the car out for the morning.

When I came down to make breakfast, Sprog2 was sitting at the table with the Transformer in his hands and he shouted with glee, "Look, Daddy! It turns into a robot and back into a car again!"

This was quite demoralising. I imagined he'd figured the thing out in the time it had taken me to get dressed. Then he happily pulled the arms sideways and flipped out the head. Voila! A robot: 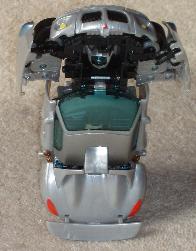 Then he shoved it back together again. He seemed pleased. 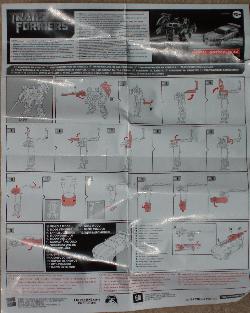