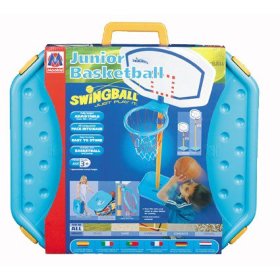 Contents:
Gameplay: It's basketball! Theoretically, there are two teams and the members of each team bounce the ball around, throw it to each other and try to score by getting it through the top of the hoop. In reality, for this to work, you need a large, flat, open area with a hard surface. For it to be fun, you also need older children with decent coordination and roughly similar ability.

Most likely, you'll end up having kids standing in line to take turns shooting penalties or you'll organise a competition to see who can score from the furthest distance.

Object: To get the ball through the hoop as many times as possible without losing the ball in the neighbours garden or a fight breaking out over whose turn it is. 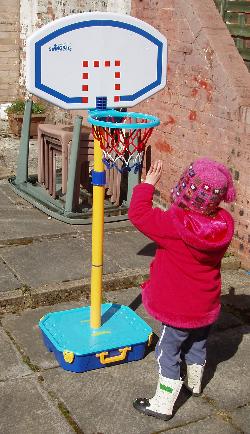 Game length: After you've gone to the trouble of putting it together, you'll want them to play it for at least half an hour.

Number of players: All the children you have, plus every other child in the neighbourhood who happens to be passing.

Age: Any child who can hold a ball will want a shot, even if they can't actually throw... or walk. If you have a child under three, be prepared for plenty of dangling a toddler over the hoop while they think very carefully about how best to drop the ball through.

Comments: Hooray! Sunshine! Thanks to all the rain last summer, I barely managed to review any outdoor gear. With luck, things will be better this year - we've had several (almost) nice days already. Of course, since Sprog1 and Sproglette have incredibly pale skin, I should probably make the most of it just now. If it gets really sunny, they'll explode in balls of fire as soon as they head out the door.

That never make for a fun game of tennis.

So, while I can still get the kids outside without needing umbrellas or having to coat them with an inch of sunblock, it's time to evict the spiders from the shed and see what fun stuff is lying around. Top of the pile is Swingball Junior Basketball.

Despite the manufacturer's assurances, it takes a fair amount of putting together. Trying to take it apart again to fit neatly back in the box is seriously not worth the effort. Once the ball's inflated, it won't fit anyway. We normally just take the stand out of the base and lean it up a corner of the shed. The base is supposed to be filled with sand or water for added stability but a couple of medium-sized rocks work just fine and are a lot less effort.

The ball bounces well and is a good size for small hands. It's a little small and light to control while dribbling, however. It's best to stick to throwing and shooting. The hoop is hinged so that, if anyone tries swinging from it, it folds down rather than breaking. A rubber washer helps prevent the adjustable mechanism from sliding down by itself but ours perished after a year or so. Happily, this had no adverse effects and simply made altering the height easier.

It's possible to miss out a section of the stand and make the maximum and minimum heights 45cm shorter. This is plenty high enough for under-fives.

All in all, the set does its job as a basketball hoop that can be set up almost anywhere. It's sturdy and looks good. Kids are desperate to play with it. That said, basketball is a tricky game to play without the ball being fumbled and skidding off in all directions or kids getting in a scuffle. You'll need a good surface and have to put in plenty of coaching before there's any chance of a proper game. If you're going to go to that much effort, you might want to invest in something more permanent. Still, Swingball Junior is great for target practice and far easier for young children to get to grips with than any racket games. 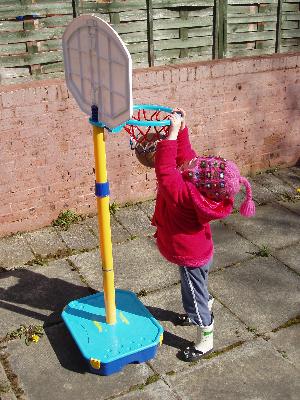 Conclusion: This is an outdoor game enjoyed by children of all ages and the adjustable height means that everyone can take part. Just don't expect to get any serious basketball going.