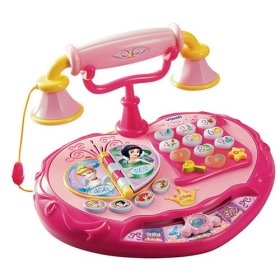 Contents: An old-fashioned telephone receiver and base with light-up number buttons and built-in phone book.

Gameplay: There are a number of games that can be selected:
Also, each of the four princesses featured has their own special button. Press it and enter the correct three-digit number to hear one of their favourite tunes.

Object: To be indoctrinated in the ways of sparkly pink consumerism.

Game length: Until the batteries run out.

Age: 3-5 years. Three-year-olds will stab at the buttons rather than playing the games. Five-year-olds will need to be into the role-playing aspects of it so as not to become bored.

Comments: What is there to say? Just look at the picture and you'll know whether the Talk 'n Teach will blend into your life. If you have a small girl who likes pink stuff with Disney princesses on, she'll love this.

Well, OK, I guess there is quite a lot of Disney princess stuff out there. I'd better give you a little more information to aid your decision-making, should you foolishly venture into the dreaded pink aisle of Toys'R'Us.

This is actually more complex than it first appears. Trained by various other toy phones I've been subjected to, I was expecting it to merely play tunes and identify pictures and numbers. It does do those things but there are additional games and features. That said, it's a bit much for a three-year-old to cope with without supervision. In the Memory game, trying to enter the numbers too quickly means that they don't register. In the Shopping game, turning to the page of shop numbers resets the question. In the Find the picture game, knowledge of the stories is required. These little issues make the Talk 'n Teach confusing and it can be hard for small children to know if they're doing the right thing.

If you're going to have to sit and take an active role, you'd be as well doing something more convincing. (CBeebies games, for example). Older children might get on better but, since getting the answers correct doesn't bring much reward, there's little incentive for them to persevere.

Still, ignoring the limited educational potential, it's an attractive toy phone. It's got flashing lights, plays tunes and has pictures of princesses on it. If you have a small child who likes that sort of toy, they won't be disappointed. Obviously, you'll be paying a premium for those princess pictures but that's the nature of merchandising.

(It's possible you may be thinking of buying this for someone else's small child. If you don't check with the parents beforehand, you might want to consider an evil cackle as you hand it over.)

Conclusion: The price, noise and sheer horror of this are unlikely to make it your first choice as a birthday gift for any little girl in your household. It's not as awful as it looks, though, and, let's face it, if you take the little girl in question to Toys'R'Us with you, then your choice may not come into it anyway.