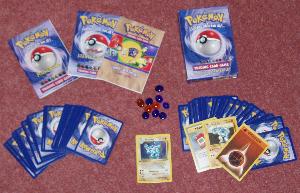 Contents:
Gameplay: Beginner rules: Each player has a deck containing pokemon cards, energy cards and trainer cards. Players have one active pokemon that's currently fighting and up to five substitute pokemon 'on the bench'. These are all laid out on the table. Players also have cards in their hand which they can use on their turn. Energy cards power up pokemon to make stronger attacks available; trainer cards allow things like healing. Active pokemon get one attack per turn and do damage to the opposing active pokemon. If a pokemon accumulates more damage than it has health, it's knocked out and has to be replaced by a substitute.

There are a few complications, like being able to swap injured pokemon for substitutes on your own go, but the basic rules aren't too complicated.

Object: To be the first to knock out three opposing pokemon.

Age: Officially 10+ but my seven-year-old and five-year-old have happily spent hours playing this. I had to talk them through the first couple of games and it's good that at least one of them can read the instructions on the cards but the basic rules are really not much more complicated than Junior Monopoly.

Comments: Sprog1 is pokemon mad. Forget falling through a wardrobe and ending up in Narnia, he wants his own Pikachu and the freedom to wander the land zapping inept bad guys with Thundershock attacks.

If you have no idea what I'm talking about, you should probably move along now. Nothing to see here. These are not the cards you are looking for...

He's played various computer games, watched the TV series, read the books, bought the annual and I made him the t-shirt. It was probably only a matter of time before he learnt about the card game. He went round to a friend's house last week and ended up playing it.

Except they didn't play it. Not really. They just had a couple of nine card booster packs and made up some rules. This offended my Warhammer-playing sensibilities. I hunted around online that evening and ordered this. On being informed of my purchase, my son was somewhat excited - he woke me up at seven the next morning to ask if it had arrived yet.

There are a lot of different packs and sets out there to make the whole thing as complicated as you like but the basics were simpler than I was expecting. There's not much else to say really - any child who is into pokemon is going to love this. If the cartoon series doesn't make them talk gobbledigook about Bulbasaurs and Vinewhip, however, (or they can't read) then it's probably worth leaving alone.

Thank you very much my son is 6 going on 7 and this is exactly what I am getting him for his birthday. I look forward to learning it with him