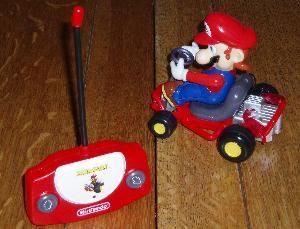 Comments: Imagine being able to recreate games of Mario Kart around the kitchen table, little remote controlled cars cornering tightly as Donkey Kong and Mario race to be the first to complete three laps without smashing into the bin or skidding through a patch of spilt juice and wiping out. Wouldn't that be fantastic?

Now imagine it where the karts can only turn while going backwards.

Not quite as good, is it?

Worse than that, the reality in this case is that the karts in question can either go straight forwards or they can go backwards and to the right. Racing isn't really an option. Trying to get one of the flipping things to go anywhere without lots of spinning round in backwards circles and/or crashing isn't even much of a option. It's more like playing a frustrating level of Super Monkey Ball than Mario Kart.

The karts do go reasonably fast but this just increases the chance of a crash and they really aren't built for crashes. The flashing tail-pipes snapped within minutes of our one coming out of the box. The batteries jolt out of place unless a tissue is crammed into the compartment with them. Actual wires jolt out of place given the chance. In fact, about the only thing that doesn't feel in danger of coming loose at any moment is the battery in the controller - I had to prise that out with a knife in the end.

It could be argued that the kart has had some rough treatment but it's not like it has inadvertently gone down the stairs or anything - it's just gone through the kind of handling you'd expect from children. No one's even stood on it. (Although I've been tempted...)

Still, it is a working model of Mario and that has to count for something. Sprog1 doesn't really care that it doesn't work that well - he's just pleased that it exists and that it's his.

Conclusion: It might look cool on a shelf but it's really not for playing with.