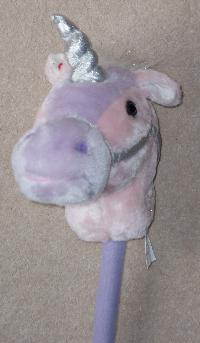 Description: What every little princess needs - a unicorn on a stick! Yes, it's a hobby horse with a pink, sparkly head and a small horn. As an added bonus, squeezing its ear produces a lengthy galloping noise and some neighing. The entire monstrosity is approximately 85cm from the tip of the horn to the end of the pole.

Comments: They had a whole tub of these at our local Instore and Sproglette fell in love instantly. She had one picked out and named before I'd even realised what they were. There was no choice but to buy it in preparation for her birthday and then walk home with a fixed grin on my face and a decapitated unicorn sticking out of the top of my backpack. I had to pretend I was off to put the frighteners on Fairytale Barbie...

There's a slight wonkiness to the way the head is attached to the pole but the general quality of the construction is surprisingly good. The short reins are sturdily attached and the stitching is decent. The battery compartment can be reached via a Velcro-sealed opening, allowing the two AA batteries to be easily replaced. (The compartment itself requires a screwdriver to open.) The pole is strong but is covered with material and has enough flexibility to ensure it can't be used as a serious weapon. As a test, I bashed myself over the head with it a couple of times and barely felt a thing. (That said, the neighbours now think I'm a bit crazy.)

All in all, the 'horse' is frightening to behold unless you're female and under seven. Sproglette is immensely pleased with it, though.

Conclusion: A little girl's dream (that may give others strangely fuchsia nightmares).