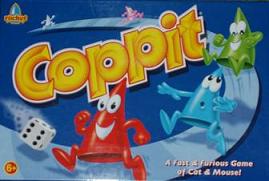 Contents:
Gameplay: Players take it in turns to roll the dice and move one of their four 'caps' in any available direction. Rolling a six brings an extra go. Blue squares and home bases are safe but caps on yellow spaces are open to capture by being landed on. It's possible to build up a stack of captured pieces under a single cap but a player capturing a stack containing some of their own pieces can release them. Enemy pieces returned to a player's home base are out of the game permanently. 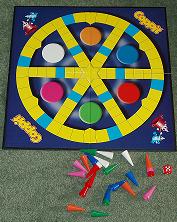 Object: To be the last player with an uncaptured playing piece.

Game length: Around half an hour.

Age: 6+. Younger children can play but will lose quickly unless given lots of advice.

Comments: I have fond memories of this from childhood and couldn't resist buying it the moment I saw it, hoping to re-live the joys of piling up a huge stack of captive cones, laughing evilly and then using them all as fake fingernails.

For once, my nostalgia wasn't entirely the result of pink-hued ocular enhancers. Coppit is a simple game that's somewhat reminiscent of Ludo but without the frustration and involving a fair bit more strategy. Since it's possible to have four pieces in play at once and each piece can have several movement options, there's plenty of room for tactical thinking. Six-player games are chaos.

Defensive play tends to be the most effective, so games can occasionally devolve into drawn out sessions of cat-and-mouse. The only real issue, though, is that it's possible for fool-hardy or unlucky players to be knocked out comparatively early in the game, leading to children stomping off in a huff. The trick is to turn this to your advantage - if you're cunning, you can engineer a hasty defeat for yourself and then slope off to read a book for twenty minutes while the kids cautiously keep to opposite sides of the board.