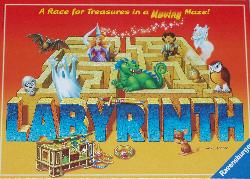 Contents:
Gameplay: The treasure cards are divided face down between the players. The maze tiles are laid out on the board. Without showing each other, the players look at the treasure card on top of their piles.

On their turn, players must take the maze tile which is currently 'spare' and insert it at the edge of the board so that an entire row of tiles shifts along one space and a different tile slides out the other side. They can then move their playing piece along any open pathway. If they reach the treasure depicted on their card, they can discard the card and take the next one. This becomes their target on their next go.

Tiles cannot be pushed back in where they've just been pushed out. (It's best to insist players leave the tile where it is next to the board until they know exactly what they're going to do with it, so they don't forget where it came from.) If a playing piece is on a tile that's pushed off the board, then the piece is placed on the opposite side of the board on top of the tile which has just been inserted. 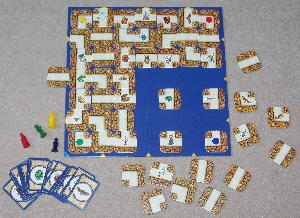 Object: To be the first player to discard all their cards and return to their starting tile.

Age: 7+. This seems about right. Players younger than this will struggle with the game's puzzle element.

Comments: Labyrinth is a very deceptive game. Sometimes it can seem trivially easy as a lucky run of cards brings a succession of treasures close at hand. Then you turn over the princess card and discover she's surrounded by a whole host of corner tiles that are facing the wrong way. Gah! The result can be five turns taking a devious route round the board followed by purposefully shoving yourself off the side. Then again, perhaps there is still an easy way and just another couple of minutes staring at the board without blinking will reveal it...

Labyrinth is one of those rare games which is both fun and challenging for the whole family. The rules can be explained in a couple of minute but figuring out the next move can take as much brain power as each player has to give.

At some point, Labyrinth is liable to make your head hurt but in a good way. It's very satisfying spotting a cunning move which will link up two spaces half the board apart. That said, it's usually possible to find a simple route that only takes an extra move or two, so even younger players can win if they're lucky.

My only complaint is that there isn't much direct interaction between players. Without knowing where opponents are headed, it's extremely hard to mess things up for them on purpose. This means less competition and strategy than there could be. On the other hand, though, the potential for older players to gain an advantage through vindictiveness is reduced.

Overall, the way that the game produces such entertaining puzzling from such a small set of rules is a triumph.