Night at the Museum 2 (Wii)

Story: In the original Night at the Museum, Larry Daley (Ben Stiller) takes a job as a night guard at the New York Natural History Museum, only to discover that the exhibits come to life after dark thanks to the power of a magical Egyptian tablet.

In this one, the exhibits get shipped off to the Smithsonian and some nefarious wax-works, including Napoleon and Al Capone, take the opportunity to seize the tablet and attempt to unleash a mystical army to conquer the world. The tablet becomes broken into pieces and Larry must reunite it to reverse the spell and save the day.

Gameplay: This is a third-person adventure. You must guide Larry round various museums, hunting for the pieces of the tablet. You can run, jump and climb and occasionally use vehicles. The magic of the tablet gives Larry's keychain whip-like abilities for swinging across gaps and long-distance grabbing. Each piece of the tablet gives Larry's flashlight a new power. These powers include fixing things, making machines work, bringing paintings to life and controlling animals. Utilising these powers allows progress through the museums. For instance, a picture of a door can be turned into an actual door, while a rhino can be used to charge down a gateway. Hostile wax-works have to be avoided or somehow defeated using the flashlight.

There are also plenty of hidden items to collect and a few side quests to complete.

Save System: Progress is automatically saved at checkpoints.

Comments: Working on a videogame tie-in to a movie aimed primarily at children must be something of a thankless task. Pity the poor developer who goes to a party, gets asked what they've been working on and has to admit it's Night at the Museum... 2... on Wii. Anyone who has a clue is going to assume it's a low-budget rush job with gimmicky motion controls tacked on. Everyone else is going to ask what it was like meeting Ben Stiller.

Imagine having to admit that even the guy modelling Ben Stiller's face didn't meet Ben Stiller: 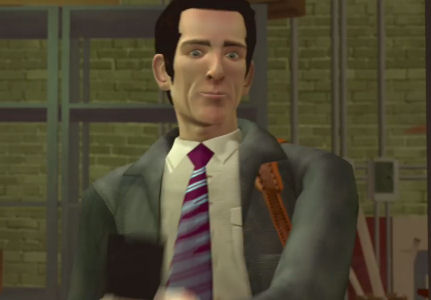 Such situations must be particularly frustrating in cases where the developers have managed to produce the foundations of a decent game but not had the proper time and resources to realise that potential. Sadly, their only consolation is that the final quality is unlikely to make much difference to sales figures anyway - grans and eight-years-olds don't read internet reviews...

Yep, Night at the Museum 2 has some good ideas and the initial level raises hopes of a Zelda-style adventure where you gradually unlock new powers and use them to solve complex puzzles while exploring large, open environments. Unfortunately, it quickly transpires that the largest level is only about five rooms big and nearly all the puzzles involve running a few feet to a big glowing spot on the floor, switching on your flashlight and invoking the correct power. In case you're easily confused, your satchel glows to let you know you can use a power and a handy voice-over from one of the characters tells you which one would be best. Just to make doubly sure, you have a flashlight power which can be used specifically to find out which other flashlight powers you can use in a particular spot. Oh, and if that isn't enough, you have a map which tells you exactly where to go and what to do. (Sadly, there are no hints to help you if you've misplaced your wiimote, can't remember where you live or have forgotten your own name...)

There are some platforming sections where life gets a bit more tricky but that's mainly because of poor design and unresponsive controls. The vehicle sections are noticeably less polished than the rest of the game but are thankfully very brief.

The game isn't a total disaster, however. Nothing is dreadfully broken and it's strangely satisfying being told you've finished 'a quest' every few seconds, making the whole experience reasonably amiable. Use of motion-sensing is limited to a bit of flicking and pointing, which actually works quite well. The writing and cutscenes give the game a certain charm and help maintain attention. (This is presumably because they've been copied closely from the movie, so they won't be as entertaining if you've seen it already. On the other, if you haven't seen the film, the game is going to spoil a lot of it for you.)

Night at the Museum 2 is suitable for children but the puzzling is easier than LEGO: Star Wars, while the platforming can be much more fiddly. A bigger issue is the game's length. The back of the box claims there are 14 levels but that's rather a stretch and counts every loading screen as the start of a new area. There are really only 9 levels, and a couple of those aren't much more than five minutes long. In fact, it's possible to complete the game 100% without breaking a sweat in under four and a half hours. That includes searching every obvious nook and cranny for collectibles on the first run through and then doing at least a third of the game a second time in order to hoover up a few remaining bits and bobs.

All in all, Night at the Museum doesn't do anything particularly successfully and has very little longevity. It's unlikely to keep the kids busy for more than a long afternoon. Nonetheless, it's likable enough and works well with jOG, so it's maybe worth a rental if you aren't planning on seeing the film any time soon and want some mindless distraction while doing a bit of light exercise.

Conclusion: At least it doesn't have gimmicky motion controls tacked on...

Graphics: Would be slightly underwhelming on the PS2.

How on earth do you get past the aeroplane bit??

Are you talking about the irritating 'flying the aeroplane through the warehouse' bit or the frustrating 'leaping around the aeroplane display' bit?

On reflection, I'm going to go with the leaping around bit in the hangar because it's a real pain:

From here you can open the hangar door. After the cutscene, start the plane, wait and then walk across the three planes close together. Start the last one and step off the wing just as it passes Amelia's plane. Ta da!

(You should only fall to ignominious doom a few times trying to pull all that off...)