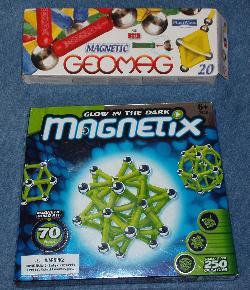 Cost: Somewhere between a few pounds and the expense of replacing the most valuable gadget in your house.

Contents:
Gameplay: Discover the joys of magnetism! Connect the rods and balls together to create shapes and models in which the joints rotate freely. Make geometric designs and scientific-looking structures. Build whatever you like... and then run out of bits before it's entirely recognisable. Pretend the experience is educational.

Age: 3+. Officially this is to ensure that children don't eat the pieces. You'll want to make sure they're also old enough to understand not to rub them against the TV, post them in the DVD player or put them within three feet of any memory cards... on pain of death.

Comments: These always look great fun in the TV adverts but magnets and electronics don't mix well so I've never been that keen on letting Geomag (or any of the knock-offs) into my house. Nonetheless, the kids were given a couple of sets so I had to face my fears.

There's no harm in being cautious, though:

I insisted the stuff was only played with in Sproglette's bedroom (which contains very few gadgets). Even then, it had to be kept in the middle of the carpet - just to make sure no pieces went missing, only to be discovered three weeks later wiping the hard-drive of my laptop. Sitting there, with empty carpet all around us, I thought I was safe until I realised that my bank cards and phone were in my pocket...

And I was this paranoid before I learnt that one of Sprog1's friends managed to write-off a telly with some Geomag when she was younger.

It's not even that great to play with. Making geometric objects is enjoyable for a little while but creating anything else is remarkably tricky. Having freely rotating joints is all very well but it means structures aren't rigid - a single nudge can totally skew them and they can collapse under their own weight.

Sproglette usually ends up making worms from the rods. She gets annoyed the balls don't stick together on their own but that the rods keep attaching to each other when she doesn't want them to.

When buying sets, it's also worth remembering that the simplest construction involves more pieces than you think. This takes twenty, for instance: 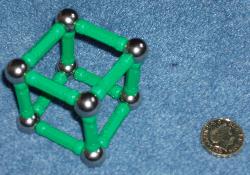 I was going to use an original DS for scale but then decided against it...
This is closer to fifty: 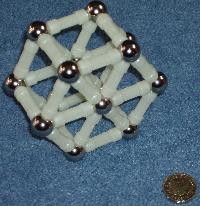 Quite how many pieces are required for that scale model of the Houses of Parliament in the TV adverts is anybody's guess.

Conclusion: Not worth the stress. Stick to LEGO or K'NEX.

Takes skill and a stack of pieces to produce anything other than geometric shapes? Noo..for example:
http://jihprotiseveru.blogspot.com/search/label/Stavby%20%22re%C3%A1ln%C3%A9%22

Those are some fantastic designs but they're totally beyond the ability of most eight-year-olds to come up with from scratch. The same kids could, however, probably manage to produce something equally recognisable out of LEGO using around a quarter as many pieces.

Yes, you are right.