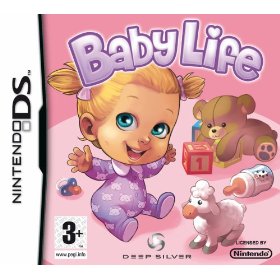 Suffice to say, to play this you're going to have to like babies (and be under twelve and female, but that's another story).

Gameplay: First you must answer some multiple choice questions to create your unique baby. Then you must feed him/her, clothe her, play with her, clean her and get her to go to sleep. A couple of taps on the touchscreen calls up a map of the house, allowing access to the different areas, such as the garden for playing and the kitchen for feeding.

You can 'talk' to your baby by drawing various symbols. The baby then smiles, cries or looks blank, seemingly at random, forcing you to do everything you can possibly think of to make it happy, just to be on the safe side. Then it cries anyway. This is scarily realistic.

Every day you must head off to the nursery and spend some time keeping between two and four children happy. The nursery is depicted by a series of 2D rooms. Thought bubbles appear above the kids' heads, showing what they want or where they wish to go. You have to tap the objects or drag the children about in the most efficient manner possible in order to keep everyone content. The four rooms available each involve slightly different tasks and stylus movements but the gameplay is very similar.

Success at the nursery leads happy parents to shower you with gifts. These are mostly new kiddie clothes and toys, such as a music player to make your baby dance and a remote-control dinosaur.

Over time, your baby grows and develops. The nursery sessions get longer.

Comments: A few weeks ago I wrote a blog post on gender stereotyping, speculating how my children might react to Baby Life. The PR people sent me a copy to test my theories.

I got my predictions dead wrong and the kids went almost totally with stereotype. The boys took one look at the pink box with a hideously cute baby on the front and said, "Did they make a mistake, Daddy, and think you were a girl?"

She's never shown any interest in touching a DS before.

As I suspected, playing it myself was like a traumatic flashback to a time of sleep deprivation and slime. I kept glancing at the virtual clock, wondering how soon I could get away with bedtime. If you have a partner or spouse who's keen on having another child but you're not so sure about the idea yourself, you might want to get them playing this for an hour or two. Chances are, before long, they'll be swearing and yelling, "Go to sleep, you annoying baby! I've already fed you five times and changed your nappy. It's time to sleep. I don't want to play with a cuddly sheep any more! Why won't you go to sleep? I just want to go and sit down with a glass of wine... sob..." (If it backfires and your partner sits glued to the screen, sighing things like, "Look at the way she dances. Isn't she cute?" there's no harm done - you were probably stuffed anyway.)

Sproglette loves playing with her baby. Now I've got her past all the text-heavy tutorials, she takes great delight in feeding him and cleaning him and chasing him round the garden with the dinosaur. She giggles at him dancing and makes him wear a silly hat. Sprog2 (6) has even started showing an interest. Whether Sproglette will ever let go of the DS long enough for him to have a shot is another question, however.

Sproglette isn't so keen on the nursery sections. They're a little beyond her at the moment. To be honest, they're not great anyway. The gameplay and graphics wouldn't trouble a Commodore 64. Worse, they don't always seem to notice player inputs, leading to confusion and frustration. Quite frankly, they're dull and slightly broken. Happily, it's possible to skip them but the downside is that this unlocks fewer new items to use in the home.

Essentially, Baby Life is about pottering around a house with a baby. Boys will be instantly put off by the box art but any girl who is drawn in by the cute toddler on the cover is liable to have some fun.

Conclusion: Certain girls will love it. For everyone else, it's more of a contraceptive than a game...

Length: Theoretically, it could last a while.

Rating: 3/5 (on the basis this isn't a videogame but an interactive, virtual doll).

It does beat most Disney Princess merchandise, though.