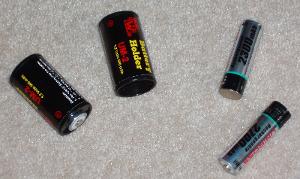 Price: Somewhere between 50p and £1 each depending on brand and pack size.

Comments: I'm forever re-charging batteries. Between the remotes for the Wii, a bunch of toy telephones, a couple of Leapsters, some torches, a handful of electronic cars, a talking Iggle Piggle and the flipping glow-in-the-dark baby which plays a tune every time Sproglette turns over in the night, I'm constantly tripping over little gizmos that are in need of portable electricity. There's always at least one that's running low on juice and announcing its imminent death with a long, low rendition of Twinkle, Twinkle Little Star which is painfully out of key.

This isn't a problem for the vast majority of items, since they run on AA batteries. With today's technology, I can have four more AAs super-charged in under an hour and the toy will be good to go for weeks.

The difficulty is with the stuff that needs bigger batteries. We only have four rechargeable C batteries in total and they take an entire day to charge. When Elefun runs out of steam, it's really rather a while before he's ready to play again. As for the things which runs on D batteries, we don't have any suitable rechargeables at all nor anything with which to recharge them even if we had.

I've been pondering buying some more big rechargeables and a suitable recharger for a while but could never face coughing up the cash. Then I discovered battery converters.

The converters are simply casings to house AA batteries to make them the right size to fit into slots for C and D batteries. Since AA batteries are the same voltage as C and D batteries, they work just as well. (My new AA rechargeables are higher capacity than my old C rechargeables, so they actually last longer.) The C converters are plastic tubes with an internal collar to hold an AA battery in place. The D converters have an extra metal cap on the end to make the converted battery long enough.

Now, whenever Elefun goes floppy or Sproglette accidentally leaves her lantern on overnight, she doesn't have to pull a sad face and wait until the weekend for me to have got round to sorting the situation. I can go straight to my stash of ready-charged AAs and have her toys working again in minutes. Hooray!

And no more D batteries for the landfill either. Double hooray! 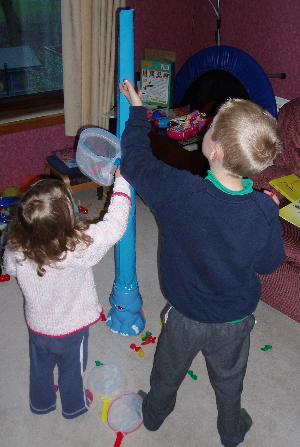 Conclusion: Why didn't someone tell me about these before?

These are great! The only 'con' I've found is getting sore fingers trying to remove the batteries from the converters, because they fit so tightly.

Good point. I think there are some that work a little differently and snap open to make getting the battery in and out easier. (Probably more expensive, though!)