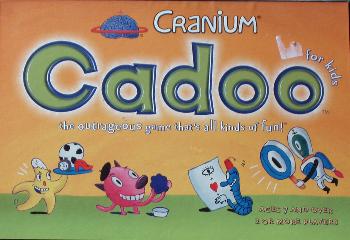 Gameplay: There are two types of card - 'Combo' and 'Solo'. On their turn, each player gets to take one card and must immediately follow the instructions written on it. The type of card taken is determined by a roll of the dice.

Combo - The player reads the instructions on the card out loud. They then use the decoder mask to read the hidden word. They have to make the other players guess the hidden word within the time limit using the method (acting, drawing or sculpting) given on the card. Success means the player whose turn it is gets to place a counter on an empty space on the board and the player who guessed correctly gets to place one of their own counters in the same space. (Both markers count for getting four in a row).

Solo - The player reads the instructions out loud and must then solve a puzzle or answer a question in the time limit. Another player checks the answer using the decoder mask. If the player is correct, they get to place one of their counters on an empty space on the board.

Object: To get four counters in a row in any direction. The line must be completed by answering a 'Solo' card correctly. If no one gets four in a row, the winner is the person with the most counters on the board once all the spaces have been filled.

Game length: It could be over in ten minutes if someone gets a row but this seldom actually happens so the game is more likely to take around half an hour.

Number of players: 2-4 but extra players can be accommodated by forming teams.

Age: 7+. Younger players can join in as part of a team but someone on each team needs to be able to read. A certain level of drawing and sculpting ability is also an advantage...

Comments: With acting, drawing, sculpting and quiz questions, this is every party game ever devised all rolled into one. Fortunately, it isn't some Frankenstein disaster. It's fun to play for both adults and children. More than that, the scoring system gets round the problem normally associated with games like Pictionary - the need for enough players to form teams.

Cadoo works well with three players and is still OK with only two. Cunningly, the 'Combo' questions help to balance the skill levels of the players. It doesn't matter if one player is particularly good at drawing, for instance, as everyone has the opportunity to benefit from their expertise.

This gives younger players a chance. They'd struggle otherwise, since they draw some very odd pictures: 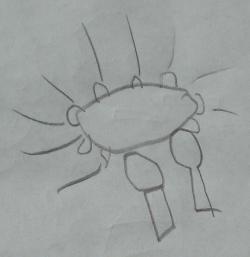 Can you see what it is yet?*

There's a good mix of 'Solo' questions, including photo recognition, dingbats and spot-the-difference, although a few of the knowledge questions seem misjudged and/or liable to becoming dated. ('Which group has the most members? U2, Destiny's Child or *NSYNC?') At least these are multiple choice, however, so younger players have a shot. The main issue is that there are only 300 cards. Since there's only one question on each card and most games use about twenty questions, it would be possible to burn through them all pretty quickly.

Still, how many other board games do you have that are worth playing through fifteen times?

Conclusion: A game suitable for children which is entertaining for adults at the same time. Hooray!

*Yep, that's right. It's a drum drawn by an eight-year-old.