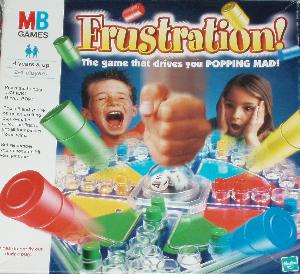 Contents:
Gameplay: Players take turns to press down the popper in the middle of the board and roll the dice inside. They then get to move one of their four pieces the indicated number of spaces around the outside edge of the board. Rolling a six means an extra go and is required to get a piece started. Landing on an opposing piece sends it back to the start.

Object: To be the first player to move all their pieces round the board and land them safely home. (And you've guessed it - exact dice rolls are required. You know, just for a little extra frustration...)

Game length: At least five minutes longer than the youngest player can be bothered to keep going. You should probably allow half an hour.

Age: 4+ but, if you're helping out, younger children can join in. All they really need to be able to do is press the popper a lot. Getting them to do it only on their own go is the trick. 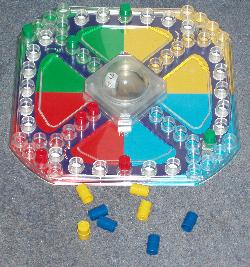 Comments: I guess the clue is in the title. Sprog1 got this game when he was three and enjoyed the popping dice and all the counting. He couldn't actually move his pieces himself, however, because of the design of the board. The moulded plastic surface has a circular slot on each space. Small children insist on placing their pieces firmly in the slot for each space they pass. This is slow and fiddly. In fact, it takes so long, they tend to get confused how many spaces they've counted already, which way they're going and whose turn it is. I ended up doing most of the moving myself.

Sprog2 quickly joined in, even though he could barely walk. Obviously, he couldn't move his pieces either but at least the slots reduced the risk of the pieces flying everywhere every time he bumped the board.

The boys then decided mummy should play too, despite the fact she was at work. They took it in turns to pop the dice for her. They also insisted that we all change to different coloured pieces every game and swap seats round the table on a regular basis. I had to move the pieces for all four of us and somehow manage it in the right order.

This was quite tricky.

It wouldn't have been so bad but the game is quite... frustrating. There are frequent periods where no one can do anything until they roll a six which means lots of, 'It's your go... my go... his go... mummy's go,' muttering, with more time spent persuading children to roll the dice than actually playing the game. Then, when someone is finally getting somewhere, another player lands on them and they're back to the start and needing to roll a six again.

Frustration is essentially a fancy version of Ludo with an earthquake-proof board and a dice you can't lose. It's OK but there are plenty of other alternatives. For instance, we've recently been playing Pokemon Sorry!. It's similar but less irritating because there's a little more strategy and there are ways of jumping ahead not just of being sent back. I also have fond memories of Coppit from childhood. Failing those, you probably have a copy of Ludo already. If not, you could make one in minutes.