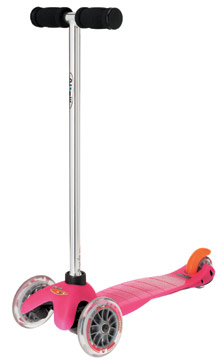 Concept: A scooter specifically designed for small children to learn on. It's light-weight and has three wheels - two at the front, one at the back. The T-bar is fixed so steering is performed by leaning when at speed or kicking off the pavement when going more slowly.

Original Comments (3/5/07): Sproglette loves this. If she had to choose between me and the scooter then I wouldn't fancy my chances... I wasn't so keen on it to start with because it made us incredibly slow. It took us ten minutes to get to the end of the street because she could only go in straight lines. She'd scoot about a metre and veer slightly off path, then have to get off, line the scooter up with the pavement again and then get back on for another minimal amount of time. After about a month, though, she's suddenly got the hang of the steering and I have to walk fast to keep up with her.

It's small enough to be used inside but it's more than a toy. Sproglette managed over a mile along pavements the other day. If she hits a pot-hole or a raised edge of pavement, it's game over, however. The scooter pivots over the front wheels and she lands on her knuckles. Now she's going faster, a helmet is required. Free-wheeling down a hill is also pretty scary to watch - she's only two-and-a-half and it's going to be a while before she gets the hang of the back brake (which looks flimsy anyway). I try to stay in grabbing distance.

It's less cumbersome than other three-wheel scooters but doesn't require as much balance as a two-wheeler. It also stays upright when parked, allowing for a quick and easy getaway. (I can just see her and her pals holding up the cornershop and making off at speed with pockets full of Smarties). 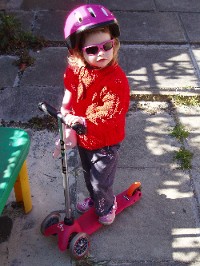 Available in blue or pink.

Conclusion: An excellent progression from the buggy if you're not going far and you're not in much of a hurry.

UPDATE: Sproglette is now four and she still uses her scooter all the time. The buggy has been folded up and put away for weeks because she can scoot just as far as I'm willing to jog after her and we get places much faster than with her on foot. She's even learnt to hit bumps without tipping over.

The back brake is sturdy enough and she does use it fairly frequently, although she'd rather put her foot down on the pavement to slow up. When it's wet, this is probably a wise move, since the wheels have no tread whatsoever. We've had to drum into her the importance of stopping a long way before she reaches a kerb. Luckily, she has good road-sense so I'm not nervous about her getting a little ahead. If she was prone to carelessness or I wasn't able to run after her, a downhill journey might be more hair-raising, however. As it is, I always insist she wears her helmet.

All in all, the scooter is one of the best kiddie purchases we've made. The micro scooter has been in almost daily use for over eighteen months and other children are enthralled when they see Sproglette zipping past. There were two kids with little pink scooters in her gymnastics class at the beginning of term. Now there are five.

I had recently bought micro scooter for my kid and everyone really like the scooter. I want to buy another scooter for my nephew, please have any idea about online store.

Nice review. We've been considering getting a Mini Micro for my 3 year old nephew. My brother and sister-in-law are going to be strict on making sure he uses a helmet which is good. As it happens we can now get a bundle with what I think is the best kids helmet on offer in their collection http://www.micro-scooters.co.uk/scooters-model-mini-micro-ages-3-5/micro-scooter-pirate-bundle.html If I could get away with wearing an adult version of that one I'd definitely get one.