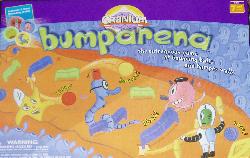 Price: Around £20 but it's becoming harder to find.

Contents:
Gameplay: The board is a slope with holes in it. At the top of the board are seven gates which are all lowered at once by pulling a lever, thus releasing balls to roll down the slope into the goals at the bottom. Players take it in turns to draw a card and then play one from their hand. Cards can allow the addition of an extra bumper or ball to the board, the movement of a ball to a different gate or the rotation of a bumper that has already been placed. The balls are released as soon as a 'Release Now' card is drawn. Players score one point for every ball which ends up in their goal.

Object: The first player to score six or more points is the winner.

Game length: Around 15 minutes (including set-up) but varies according to chance and indecisiveness.

Number of players: 2 or 3. There are three goals, colour-coded red, green and blue. The middle (green) one is blocked off if there are only two players. If one of those two players is a small child who really, really likes green you will be stuffed.

Age: 7 and up. Younger children can play it but they're liable to put bumpers in totally nonsensical places unless given plenty of advice. Even seven-years-olds are likely to have a much weaker grasp of the laws of physics than you'd imagine. Personally, I blame cartoons...

Comments: This is almost a great game. There's a good mixture of luck and strategy. It's also tactile and interactive like the best kind of hands-on exhibit at a science museum. Unfortunately, a few niggling problems separate it from true excellence. Setting up and dismantling the board feels like a chore. The card dispenser is awkward for children to fill and to use but doing without it isn't an option because the 'Release Now' cards are marked on both sides for no good reason. The balls are quite rubbery and roll too slowly, giving them a tendency to get stuck on the bumpers which is a recipe for arguments.

Despite this clumsy application, however, the underlying idea of the game is genius. There's vindictiveness, suspense and simple mechanics. What more could you want? (Apart from Keira Knightley, obviously).

Pros:
Cons:
Conclusion: Worth borrowing an older child in order to have an excuse to play it.
Rating: 4/5.